Despite Territorial Loses, the ISIS Global Position Is Secure 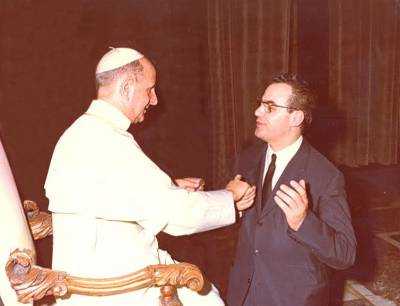 Our contributor, Dr. Tatiana Yugay, Professor of the Plekhanov Russian Economic University an expert on Italy and a former advisor to the President’s Administration and Security Council of the Russian Federation, introduces the author of this article written especially for RI:

Giancarlo Elia Valori is one of the most controversial and mysterious protagonists of the Italian political and business world. Italian media call him “il grande vecchio” (the grand elder). I prefer to regard him as a political heavyweight.

It’s hаrd to believe that information about him in search engines refers to one and the same person.

Не is a prominent Italian industrialist long involved with the Middle East, including playing a major role in the release of hostages. Не has lectured on international affairs and economics at Peking University, the Hebrew University of Jerusalem and the Yeshiva University in New York and is an economic adviser to the Chinese giant HNA Group and Khashoggi Holdings and was personally acquainted with Kim il Sung.

At the UNESCO official site you can read that:

“Giancarlo Elia Valori is an internationally renowned manager, professor and economist and is considered to be one of the most authoritative international experts of economic and social trends. In 1992 he was appointed Officier de la Légion d’Honneur de la République Francaise as: “A man who can see across borders to understand the world”. Since May 11th 2001, he has been a UNESCO Goodwill Ambassador for his generous efforts in the defense and promotion of our heritage. In 2002 he received the title of “Honorable” of the Académie des Sciences de l’Institut de France”.

Valori has written several books on geopolitics.  He publishes geopolitical posts in his blog“Osservatorio Globale” and is a columnist for “Il Punto Geopolitico di Giancarlo Elia Valori” at primapaginanews.it. He was one of the first to react to the downing of a Russian SU-24 by Turkey in his post “What does Turkey want?”.

Even if you do not agree with his analysis, it is worth having an idea of how a person such as this sees the world.

How are the Russian/Syrian operations and those of the United States and its coalition in Syria going and, more importantly, what can we expect from them? According to Western sources, while only losing 14% of its territory in 2015 ISIS recently reduced its size by 40% overall and by 20% in Syria without recovering the same amount of territory in Eastern Syria.

Al Baghdadi also lost much of his territorial control in the area along the border with Turkey and reached the traditional areas along the border with Jordan for smuggling and transit of militants. Areas toward the Lebanese border and in the Palmira region are also reported to be under ISIS control.

Thus, so far, neither the US Coalition nor Russian-Syrian pressures seem sufficient to definitively destabilize Al-Baghdadi’s Caliphate, despite its current territorial losses.

ISIS is therefore likely to restructure itself in the form of a first-phase Al Qaeda, as indeed it already appears to be doing.

This means that it could create – or has already done so – a small, centralized organizational structure, with informal peripheral networks in Europe, North Africa and Central Asia, with a view to organizing mass terrorist actions,  sapping the West’s resistance, and finally disrupting  European security forces.

But why do the combined Russian-Syrian and US-led actions not work?

First, the Caliphate’s weapons: it has acquired most of the stocks abandoned by the Iraqi and Syrian armies, which are sufficiently advanced to counter the defenders’ systems.

Absolute technological superiority is not needed.The will to fight and higher mobility of the Caliphate’s armies are more than enough.

In essence, ISIS can avoid attacking the best equipped parts of both coalitions, while predicting and avoiding the West’s points of attack thanks to a unified command and control center located far from the lines.

This center employs the same technologies as the anti-jihadist forces, as well as similar logics of action. Mimicking the enemy is an effective way of fighting it.

Furthermore, mobility replaces technological superiority, and currently nobody – except for the Russian Federation – wants to fight for “Gdansk”, i.e. Damascus.

The Caliphate’s conventional strategy is “from the weak to the strong” – in philosophers of war, Beaufre and Ailleret’s terminology, where the West is weak both on the ground, where ISIS is much more mobile and causes politically unacceptable damage to the West (with the exception of Russia and the Kurdish and Yazidi militias) and among the Western public, where the fairy tale of “good” immigration blocks the necessary presence of Western troops on the ground.

Not to mention that on its own territory, ISIS has taken over the Hamas system in Gaza: a thick, dense network of underground tunnels that protects economic activities needed to support the organization from air attacks.

Another primary goal of Al Baghdadi is to saturate Western police forces, scarce in number and weapons, making them useless against its attacks,while Europe surrenders to “multiculturalism”.

“The bell tolls for us, too” – as in the title of Ernest Hemingway’s novel on the Spanish Civil War – which paved the way for World War II.

There will soon be a core of militant jihadists not necessarily trained in Syria, but connected via the Internet, and a vast network of “fellow travelers” who can serve as cover, logistical support, recruitment, political and media manipulation for more gullible or fearful Westerners.

This will be – and, indeed, it already is – the structure of Al Baghdadi’s Caliphate in Europe.

The Caliphate also has efficient branches in the Barka province in Libya, and in the Sirte district, with the agreement between ISIS and Gaddafi’s tribes – as well as in Jund-al-Kilafah in Algeria, Al Shaabab in Somalia, Boko Haram in Northern Nigeria, Jundallah in Pakistan and Abu Sayyaf in Malaysia.

The void of Western inanity is quickly filled by ISIS, which does not know international law, but only a miserably manipulated Koran.

A mechanism similar to that of communicating vessels is in place: the more the ISIS crisis deepens on its territory of origin, the more threatening and powerful the peripheral groups become.

At the same time, in Europe we are witnessing mass radicalization maneuvers using the Al Qaeda technique: first, more or less crazy “Manchurian candidates”, who play havoc in small areas. Later, – mass actions, as in Cologne; then again real, visible and very effective terrorist attacks, and similar mass actions in Hamburg and Zurich.

Finally, when it becomes logistically possible, we will see the creation of small “Caliphates” in areas of Europe where the long-term stupidity of EU leaders has allowed mass Islamic immigration to seize neighborhoods and cities.

Years of peacekeeping and “stabilization” have turned the undersized European Armed Forces into traffic guards and organizers of elections (always rigged)  without disturbing the sleep of European peoples.

Russian Su -24 scores off against the American “USS Donald Cook”