The Global Currency War Has Begun

China’s Yuan Breaks the 7 to $1 Band. Why is The Dollar Rising? 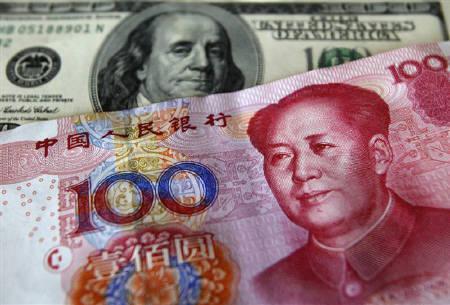 Over this weekend, China’s Yuan currency broke out of its band and devalued to more than 7 to $1. At the same time China announced it would not purchase more US agricultural goods. The Trump-US Neocon trade strategy has just imploded. As this writer has been predicting, the threshold has now been passed, from a tariff-trade war to a broader economic war between the US and China where other tactics and measures are now being implemented.

Trump will no doubt declare that China is manipulating its currency

A devaluation of the Yuan has the effect of negating Trump tariffs imposed on China. But China isn’t manipulating its currency. Manipulation is defined as entering global money markets to buy and/or sell one’s currency in exchange for dollars (the global trading currency) in order to influence the price (exchange rate) of one’s currency in relation to the dollar. But China is not doing that, so it’s not manipulating. What’s happening is the US dollar is rising in value (or expected to) and that rise in effect lowers the value of the Yuan. The same is happening to other currencies as well,as the dollar rises. Why is the dollar then rising? There’s a global stampede to safety and that means buying US Treasuries–which are now in freefall in terms of interest rates (and escalating in terms of price). Prices from one year or even less, to 10 and 30 year Treasuries are accelerating. But to buy Treasuries, foreign investors must sell their currencies and buy dollars before buying Treasuries. That escalating demand for dollars is what drives up the value of the dollar, which in turn drives down the value–i.e. devalues-the Yuan in relation to the dollar.

In other words, the slowing global economy which is being driven by the Trump trade wars is what is causing the flight to the dollar and to the safe haven of US Treasuries. Trump’s policies are at the heart of the global slowdown (already in progress due to fundamental forces stalling investment and growth). That slowdown is what’s driving the dollar and in turn lowering the Yuan. Trump policies are ‘manipulating’ the Yuan.

China is of course allowing the devaluation to occur. Previously, it was entering money markets to buy Yuan in order to keep it from devaluing. Now it’s just allowing the process to occur. This is China’s response to Trump’s imposing an additional 10% tariffs on $300 billion of China imports last week. It signals that the ‘trade’ war (now becoming an economic war) has moved beyond tariffs.

With Trump’s recent actions, and China’s now response, the potential for a trade agreement in 2019 looks even more unlikely than before.

What will Trump now do? If he remains true to his past behavior when bargaining partners stand up to him, he’ll try to find a way to ‘up the ante’ as they say, and take additional action. He could step up his attack on Huawei and on other China corporations’ partnerships and investments in the US. China will in turn impose restrictions on US corporations doing business in China (i.e. more licensing, more customs inspections, and imposing more non-tariff barriers). It could unleash an anti-American goods boycott in China. It could reduce the export supply of critical ‘rare earths’ it has. It could suspend its previous decision to allow US corporations doing business in China to have a 51% ownership of those operations. And then it has its ‘nuclear options’, as they say: to cut back sharply or cease purchasing US Treasuries and thus recycling US dollars back to the US. Should that happen, the US government would have to borrow more from other sources to offset its annual budget deficit. That would raise the national debt annually even faster than it has been growing–now more than $22 trillion and projected now to rise more than $1 trillion this year. Should recession occur, the deficits and debt could rise as much as $1.7 trillion, according to the US Congressional Budget Office, CBO, research arm.

But with demand for dollars to buy Treasuries surging, the US Treasury and Fed would have more difficulty selling Treasuries, equal to China’s decline of purchases, given that Treasury prices are escalating and interest rates falling.

In short, the US-China trade war, the slowing global economy (now about to spill over to the US economy), the US budget deficit, and Fed interest rates are all inter-related. Trump policies are creating economic havoc on all these fronts.

What are some of the likely responses therefore to the China responses to Trump’s hardball strategy-driven by US neocons since May?

The neocons will have attained their goal, which has always been to scuttle negotiations with China unless the latter capitulated on the technology issue. Behind the tariffs, behind the trade war, has always been the war over next generation technologies (cybersecurity, 5G, and AI). It’s now clear that China will not capitulate, so no trade deal is possible so long as the US neocons remain in control of the trade negotiations which, at this point, they still do. The neocons will now use China’s strong response to Trump’s latest tariffs to convince Trump to take an even harder line against China corporations in the US and abroad with obsequious US allies like the UK and Canada.

Trump’s campaign re-election staff will see this as an opportunity to start blaming China for the slowing US economy. Themes of ‘China the currency manipulator’ and ‘China the source of US opioids’ may become the mantra from the White House.

US big business and multinational corporations will be further motivated to put pressure on Trump to go back to the negotiating table and settle. To date, however, they’ve been largely unsuccessful with influencing Trump and the trade negotiations. The Pentagon, military industrial complex, and US war industries have Trump’s ear and they’re shouting ‘technology capitulation’ or no deal’.

The US Farm sector will be in dire straits now. It’s almost certain that within the next six months Trump will have to provide them a third bailout, costing $20 billion or more. That will mean a total of $50 billion cost in farm subsidies due to the China-US trade war.

Globally, emerging market economies are likely to be big losers from the worsening trade relations between Trump and China. Their currencies will decline like the Yuan. But they have far fewer resources than China has to weather the crisis. Declining currency values in emerging market economies (EMEs) will mean more capital flight from their economies, seeking ‘safe haven’ in US Treasuries, in other currencies (Japan’s Yen as ‘carrying trade’), or in gold. That capital flight will slow their domestic investment. Their central banks will then raise interest rates to slow the flight, but that will slow their domestic economies further. The declining currencies will also mean rising import goods inflation and drive their domestic inflation levels higher, as their economies simultaneously slow. EMEs will face both more recession amidst rising inflation.

The China-US trade deterioration will also likely exacerbate inter-capitalist conflicts, as is already beginning to appear in the current South Korea-Japan trade dispute.

The worsening US-China situation will also have a negative effect on Europe’s economy, already about to slip into recession soon. More dependent on exports, especially Germany, the deterioration of global trade will accelerate Europe’s slowdown. The growing likelihood of a ‘hard’ Brexit coming at the same time in October, will almost certainly plunge Europe into another major recession as well, even before the US.

As the global economy slows and contracts, financial markets–already declining sharply from record highs–can be expected to become increasingly unstable. High on the list of ‘fragile’ financial markets are the non-performing bank loans in Europe, Japan, and especially in India. India’s ‘shadow banks’ are especially unstable. Corporate dollar based bond markets in Latin America are another locus of fragility. And in the US, junk bond, triple B investment grade corporate bonds (also junk), and leveraged loans (i.e. junk loans) are candidates for financial instability events following the next US recession.

In short, Trump has been making a mess of US economic policy. And the Fed and monetary policy of lower interest rates cannot ‘save’ him. Recent (and future) cuts in interest rates will have virtually no effect on the real US economy in coming months as it slows. And Trump has essentially negated fiscal policy as a source of stimulus. His massive 2018 tax cuts ($4 trillion over the next decade) has played a primary role in the US annual $1 trillion budget deficits now baked into the US economy every year for another decade. US national debt will go to $34 trillion and, according to the CBO, interest on the debt alone will rise to $900 billion a year by 2027. So fiscal policy as tax policy is now painted into a corner along with central bank interest rate policy. And massive deficits and debt mitigate against political action to increase government spending as a way out of Trump’s crisis.

For the past decade or more, US policy has been to use both monetary policy and tax policy to subsidize capital incomes to the tune of trillions of dollars a year, every year. It used to be that monetary (Fed) and fiscal policy were used to ‘stabilize’ the economy in the event of recession or inflation. No longer. A decade and more of using these policies to subsidize capital incomes has led to the negation of the effectiveness of these policies for purposes of economic stabilization.

The US is now headed for a major recession, with neither ‘monetary ammunition’ nor fiscal ammunition at its disposal with which to try to stimulate the economy as it enters recession. This has never happened before. But its consequences could be enormous–for the depth and duration of any recession to come.

Note to readers: please click the share buttons above or below. Forward this article to your email lists. Crosspost on your blog site, internet forums. etc.

This article was originally published on the author’s blog site: Jack Rasmus.

Dr. Jack Rasmus is author of the forthcoming book, ‘The Scourge of Neoliberalism: US Policy from Reagan to Trump’, Clarity Press, September 30, 2019. Dr. Rasmus blogs at jackrasmus.com. His website is kyklosproductions.com. His twitter handle @drjackrasmus. He is a frequent contributor to Global Research.