Obama Confronts Americans’ Fears in State of the Union Speech

WASHINGTON — President Obama on Tuesday set forth an ambitious vision for America’s future but conceded his own failure to heal the political divisions holding back progress, calling it a lasting disappointment of his tenure.

In a prime-time televised speech that avoided the usual litany of policy prescriptions, Mr. Obama used his final State of the Union address to paint a hopeful portrait of the nation after seven years of his leadership, with a resurgent economy and better standing in the world despite inequality at home and terrorism abroad.

But Mr. Obama, who campaigned for president on promises of hope and change, and vowed when he took office to transform Washington and politics itself, accepted responsibility for falling far short of that goal.

“It’s one of the few regrets of my presidency, that the rancor and suspicion between the parties has gotten worse instead of better,” Mr. Obama said, adding that “a president with the gifts of Lincoln or Roosevelt might have better bridged the divide.”

He acknowledged that many Americans feel frightened and shut out of a political and economic system they view as rigged against their interests, even as he offered an implicit rebuke of Republicans who are playing on those insecurities in the race to succeed him.

“As frustration grows, there will be voices urging us to fall back into tribes, to scapegoat fellow citizens who don’t look like us, or pray like us, or vote like we do, or share the same background,” Mr. Obama said. “We can’t afford to go down that path.”

He repeatedly sought to contrast Republicans’ bleak appraisals of the state of the nation with his own upbeat assessment. He called his opponents’ version “a fiction” and defended his decisions, many of them flash points for the partisan divide. Mr. Obama implicitly singled out Donald J. Trump, the leading Republican presidential candidate, for pointed criticism, saying that Americans must resist calls to stigmatize all Muslims at a time of threats from the Islamic State.

“Will we respond to the changes of our time with fear, turning inward as a nation, and turning against each other as a people?” Mr. Obama said. “Or will we face the future with confidence in who we are, what we stand for, and the incredible things we can do together?”

He also made an indirect but derisive reference to Senator Ted Cruz of Texas, another Republican presidential contender who has criticized Mr. Obama’s foreign policy and urged him to “carpet bomb” the Islamic State.

“The world will look to us to help solve these problems,” Mr. Obama said of global challenges, “and our answer needs to be more than tough talk or calls to carpet bomb civilians.”

The speech, a mix of Mr. Obama’s often lofty rhetoric and punchy, colloquial language, drew more scattered applause than in earlier years. The president appeared liberated by his decision not to present the usual menu of legislative proposals, although it lasted an hour and four minutes, longer than some past addresses. Mr. Obama spoke informally at times, and with occasional flashes of humor.

“Now I’m guessing we won’t agree on health care anytime soon,” he said at one point, as the sound of a single person clapping on the Republican side could be heard in the chamber. Mr. Obama smiled. “A little applause back there,” he said wryly. 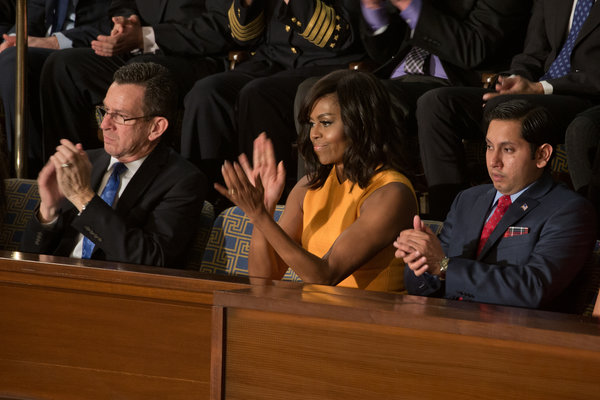 Mr. Obama opted for symbolism to make some of his points, leaving a chair empty in the first lady’s guest box to symbolize the victims of gun violence. The other seats were filled by an array of guests including a Syrian refugee. Among the guests invited by Republican lawmakers was Kim Davis, the Kentucky court clerk who became a folk hero to social conservatives for refusing to sign marriage certificates for same-sex couples.

In his remarks, Mr. Obama said America should harness innovation and not be intimidated by it. He called for a “moonshot” effort to cure cancer, to be led by Vice President Joseph R. Biden, Jr., who lost his son to the disease last year.

The address before a joint session of Congress departed from Mr. Obama’s past practice of outlining executive actions intended to sidestep gridlock in Washington.

Instead, Mr. Obama sought to pose and answer the four central questions his aides said were driving the debate about America’s future, including how to ensure opportunity for everyone, how to harness technological change, how to keep the country safe, and how to fix the nation’s broken politics.

He called for an end to gerrymandering — the gaming of political districts to ensure one party’s advantage — reducing the influence of secretive campaign contributions and making voting easier. Mr. Obama also called on Americans to get more involved in politics and participate, a theme of his first campaign and of his presidency.

The speech was one of Mr. Obama’s few remaining opportunities to shape the public conversation before the nation’s attention shifts to the campaign to replace him that is already underway. Except for a final address at the Democratic convention this summer, Tuesday night might have been Mr. Obama’s last big speech.

“I know some of you are antsy to get back to Iowa — I’ve been there,” he said at the start, acknowledging that the political focus is on the state, which holds the country’s first nominating caucuses.

Mr. Obama was determined that the address be forward-looking, aides said, even as his time remaining in the White House is limited. The president called for compromise with Republicans on an overhaul of the criminal justice system, approval of a broad free-trade agreement spanning the Pacific Rim and new initiatives to address poverty and the opioid crisis in the United States. He proposed to provide jobless workers with retraining in addition to the unemployment payments they already received.

And he repeated past calls for legislative action on his domestic initiatives that have fallen short, including raising the minimum wage, revising the nation’s immigration laws and enacting stricter gun restrictions.

He used the speech to trace the arc of his presidency and its major themes: the economic collapse and recovery, the passage of the Affordable Care Act, the push for free trade and climate pacts, and his failed bids for an immigration overhaul and new gun laws.

Mr. Obama also argued that the country’s most acute challenges emanate not from the strength of adversaries — a primary criticism of Republicans who portray the president as feckless in the face of mounting threats — but from their weakness.

He defended his approach to taking on the Islamic State, also known as ISIS or ISIL, describing it as a dangerous threat to the United States that must be dealt with, but not an existential one, and not a force that warrants a commitment of American ground forces in Iraq and Syria.

The president also said the United States is uniquely positioned to rally other countries to solve global problems, highlighting his work in forging a nuclear deal with Iran, opening a new era of relations with Cuba, pressing for a global accord reached in Paris to combat climate change and efforts to stop the spread of Ebola.

Republicans, too, used the occasion to contrast their agenda and their values with those of the sitting president, and to offer their own, far more negative assessment of his tenure.

“The president’s record has often fallen far short of his soaring words,” Gov. Nikki R. Haley of South Carolina said in her official response, delivered immediately after Mr. Obama’s. “As he enters his final year in office, many Americans are still feeling the squeeze of an economy too weak to raise income levels.”

“Even worse,” she added, “we are facing the most dangerous terrorist threat our nation has seen since September 11th, and this president appears either unwilling or unable to deal with it.”

“If we held the White House,” Ms. Haley said, taxes would be lower, spending slowed and the military strengthened.

The Syrian War and the return of great power politics