U.S. Increases Risk Of War On Iran Without A Path To De-escalation

Is the U.S. military, which lost its powerful positions in the White House, trying to get National Security Advisor John ‘Stache’ Bolton fired?

A ‘leak’ to the New York Times accuses Bolton of preparing for war on Iran:

At a meeting of President Trump’s top national security aides last Thursday, Acting Defense Secretary Patrick Shanahan presented an updated military plan that envisions sending as many as 120,000 troops to the Middle East should Iran attack American forces or accelerate work on nuclear weapons, administration officials said.The revisions were ordered by hard-liners led by John R. Bolton, Mr. Trump’s national security adviser. It does not call for a land invasion of Iran, which would require vastly more troops, officials said.

The development reflects the influence of Mr. Bolton, one of the administration’s most virulent Iran hawks, whose push for confrontation with Tehran was ignored more than a decade ago by President George W. Bush.

More than a half-dozen American national security officials who have been briefed on details of the updated plans agreed to discuss them with The New York Times on the condition of anonymity.
…
Among those attending Thursday’s meeting were Mr. Shanahan; Mr. Bolton; General Dunford; Gina Haspel, the C.I.A. director; and Dan Coats, the director of national intelligence.

In a possible quit pro quo the delivery of ‘options’ by the Defense Department happened on the same day that acting Secretary of Defense Shanahan was finally nominated for the permanent position. The previous Secretary of Defense James Mattis had ignored similar options requests from the White House. Trump fired Mattis at the end of last year.

An alternative view is that Bolton himself leaked the briefing to shore up the Trump administration’s propagandistic threat against Iran.

Still, it is obvious that that some of those present at the meeting disagree with whatever Bolton’s plans are.

In another sign of disagreement within the Trump administration the State Department just fired a Bolton ally:

A top U.S. arms control official and prominent Iran hawk has resigned from the State Department after serving just over a year in the position, said U.S. officials and congressional aides familiar with the decision.The State Department on Monday did not offer a statement explaining the planned departure of Yleem Poblete, the assistant secretary of state for arms control, verification and compliance.
…
In April, Reuters reported that some U.S. officials were concerned that the compliance report politicized and slanted assessments about Iran, which the Trump administration has singled out as the country’s principal foe.
…
Poblete was a favorite among hard-line anti-Iran groups such as the Foundation for Defense of Democracies, which hosted her for a speech in July 2018 in which Poblete praised the U.S. withdrawal from the Iran deal.

The news comes after mysterious reports of damage on allegedly four ships, including two Saudi oil tankers and a Norwegian vessel, anchored near the United Arab Emirates oil port Fujairah. The incident is said to have happened on Sunday morning but the official report came only some 36 hours later. Only one of the ships was pictured with damage that seems to have resulted from a collision and not from explosives:

The owner of the Norwegian vessel, Thome Ship Management, said the vessel was “struck by an unknown object”. Footage seen by Reuters showed a hole in the hull at the waterline with the metal torn open inwards. 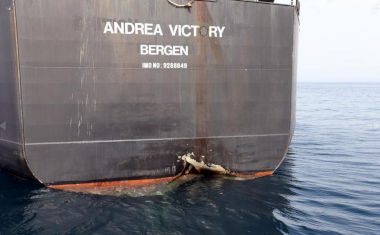 Fujairah lies east of the Strait of Hormuz. The UAE built a pipeline from its oilfields on its west coast to Fujariah to avoid that its oil exports have to pass through the Strait which Iran can control. The attack near Fujairah will be interpreted as a warning from Iran that no oil export from the Gulf is safe unless Iran can export too. 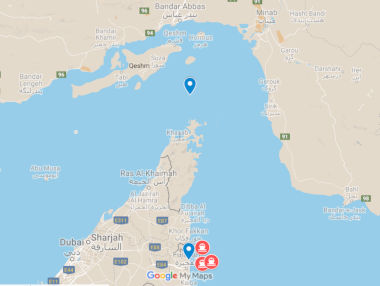 But it is far from assured that Iran was involved in the incident:

It was a similar situation when a Japanese tanker, the M. Star, was damaged by a bomb in 2010 about 14 miles (22 kilometers) off the U.A.E. coast near Fujairah. The Brigades of Abdullah Azzam, a Sunni militant jihadist group, claimed responsibility.

The UAE is actively involved in a the war against the Houthi in Yemen and against Muslim Brotherhood and al-Qaeda affiliates in Libya. It has hostile relations with Turkey and Qatar. There are many who would like to send it such a message.

That the damage appeared to have come from a collision points to another possible culprit. U.S. submarines are known to move submerged in and around the Strait of Hormuz . There are two known incidents, in 2007 and in 2009, in which submerged U.S. submarines collided with other ships in the area.

Curiously the news of the damaged ships came after false reports of fire in the UAE appeared in Iran friendly media:

Earlier, the UAE was the subject of false accounts of an attack after news outlets with links to the Kremlin, Hezbollah and Iran spread claims that a series of explosions had occurred on land at Fujairah’s port.Reports that between seven and 10 oil tankers anchored at the port were in flames were shared widely on social media accounts on Sunday.

Some reports said that American and French warplanes had been flying over the port at the time of the incident.
…
The reports of fire and explosions that emerged on Sunday morning apparently originated in Al Mayadeen, a Lebanese broadcaster and news outlet regarded as pro-Hezbollah.

Burning ships near Fujairah would be widely seen from land, sea and air. No pictures of any such fire appeared on social media.

The Al Mayadeen report may have been part of a warning from Iran. Or it may have been a preemptive move to undermine a false flag incident that was to be blamed on Iran. Iran seemed to deny any involvement in the incident:

In a statement issued early Monday, Iranian Foreign Ministry spokesman Abbas Moussavi described the incident as “lamentable” and “worrying” and called for thorough investigations.He also warned Persian Gulf neighbors to stay vigilant in the face of plots by “ill-wishers” to undermine maritime security.

On May 10 the U.S. warned that Iran might target commercial vessels. That, together with the lack of information and of visible damage on other ships, points to a false flag incident initiated to slander Iran. A U.S. official blamed Iran but provided no evidence:

A U.S. official in Washington, without offering any evidence, told The Associated Press that an American military team’s initial assessment indicated Iran or Iranian allies used explosives to blow holes in the ships …

An attempt on Monday by Secretary of State Mike Pompeo to rally European countries against Iran failed:

While Secretary of State Mike Pompeo may have been hoping that a hastily arranged stop in Brussels today would allow for photos and headlines showing American and European unity and joint resolve in the face of rising tensions with Iran, European allies did not seem interested in playing along.
…
EU foreign policy chief Federica Mogherini did little to hide her irritation that the Americans had abruptly decided to make a show of consulting the Europeans on rising Iran tensions.
…
“We were told during the night that [Pompeo] was planning to change his travel plans and to have a stopover here in Brussels,” Mogherini told journalists ahead of the EU foreign ministers meeting. “We will be here all day with a busy agenda so we will see during the day how and if we manage to arrange a meeting. He is always welcome, obviously, but there are no precise plans for the moment.”“Any escalation should be avoided,” she said.

El Pais reports (Spanish) that Spain withdrew its frigate ‘Méndez Núñez’ from the US carrier strike group that is moving towards the Persian Gulf.

To counter the increased war talk emanating from the White House, Iran put some of its military on alert:

Iran has deployed its ballistic and cruise missiles, some in positions visible to US satellites and drones. They are ready for any confrontation with the US military apparatus, in case the US administration decides on war. Iran is responding to President Donald Trump’s belligerent declaration that he is gathering more naval forces in the Persian Gulf as a possible preparation for war. The Grand Ayatollah Ali Khamenei called for a full readiness of the Iranian Revolutionary Guard Corps (IRGC) and the army for the worst-case scenario. According to Iranian officials, “Iran will consider itself at war with every country in the Middle East that allows the US to use it as a base for its military campaign against Iran, the day Trump decides to go to war”.

It is difficult to judge if the rhetoric and moves against Iran, amplified by gullible media, are just propaganda aimed at pushing Iran towards negotiations, or if they are a build up of a realistic military threat against that country. What is assured though is that the current situation increased the chance of an incident – caused willfully or by accident by Iran, the U.S., or interested third parties – that could lead up to a war or at least some intense military exchanges. The all-out economic war the U.S. wages against the people of Iran increases this instability. There are no communications between the U.S. and Iran and the Trump administration seems to have no de-escaltion strategy:

“This administration’s maximum pressure campaign, and Pompeo’s 12 demands from Tehran, leaves little room for Iran to conduct face-saving negotiations,” Geranmayeh said, echoing the concerns of many who fear that Washington has left no room for Iran to walk back its threats and come to the table.

The Mind of Mr. Putin