‘Life Is Such a Simple, Yet Cruel Thing’ 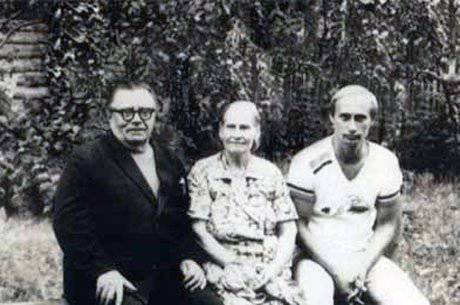 Frankly, my father did not even like to touch on the subject of the war. It was more like I was simply nearby when the adults were discussing or recalling things among themselves. All my knowledge about the war – about what happened to my family – arose out of those overheard conversations between adults. Still, there were times when they spoke to me directly.

My father was a sailor. He was called up in 1939 and served in a submarine squadron in Sevastopol. On his return, he worked in a factory in Peterhof where he lived with my mother. I think they even built some kind of little house there.

When war broke out he was working in a military company, which entitled him to an exemption from conscription. However, he applied first to join the party and then again to be sent to the front. He was dispatched to a NKVD sabotage squad. It was a small contingent of 28 people who were sent into the nearby rear to carry out acts of sabotage – blowing up bridges, railway tracks, etc. Almost immediately they ran into an ambush – someone betrayed them. They entered a certain village, then left it, and when they returned some time later the Nazis were already waiting for them. They were chased through the woods. My father survived by hiding in a swamp where he spent hours under water breathing through a reed. I remember this from his story. He said that while he was in the swamp breathing through the reed, he could hear the German soldiers passing by, just a few steps away from him, and how the dogs were yapping…

On top of that, it was already presumably early autumn, which is to say it was already cold. I also remember well how he told me that the head of their group was a German. A Soviet citizen, but German nonetheless.

Interestingly, a couple of years ago I was handed a dossier on this group from the archives of the Defense Ministry. I still have it at my home in Novo-Ogaryovo. There is a list of the group – surnames, first names, patronymics and brief descriptions. It was indeed 28 people and their leader was a German, exactly as my father had said.

Of the 28 people, only 4 crossed the front line back to our side. The other 24 were killed.

They were then reassigned into the active army and sent to the Nevsky Pyatachok. It was probably the most violent spot during the whole of the Leningrad Blockade. Our troops held a small bridgehead four kilometres in width and some two kilometres in depth. It was supposed to be a springboard for the future breaking of the blockade, but it never got used for this purpose. They broke through the blockade elsewhere. Still, the spot (Nevsky Pyatachok) was held for a long time and there was exceptionally heavy fighting there. There are commanding heights above and all around and it was shot at throughout. Of course the Germans were also aware that it was the most likely place for a breakthrough and tried simply to erase the Nevsky Pyatachok from the face of the earth. There is data about how much metal there is in each square meter of this land. To this day it’s solid metal.

My father told me how he was wounded there. The wound was severe and he lived the rest of his life with shrapnel in his leg as not all the fragments could be removed. His leg always ached and he could never straighten his foot properly afterwards. They chose not to touch the small fragments to avoid shattering the bone. And thank God, they kept his leg when they could have amputated – he had a good doctor. He was assigned group II disability. As a disabled veteran, he was eventually given an apartment. It was our first separate apartment – a small two-room place. (Note: Before that the Putins lived in a communal apartment, where several families share the facilities, corridor and kitchen, and sleep in separate rooms.) Before we were given the apartment, we lived in the city centre and now we had to move, not quite to the outskirts, but to a newly-built area. That did not happen immediately after the war, but when I was already working at the KGB. I was not given an apartment then, but my father finally got his, and it was cause for great happiness. His account of how he was wounded was as follows:

He, together with a comrade, carried out a little sortie into the rear of the Germans, crawling, crawling, and then it becomes both funny and sad at the same time. They reached a German bunker, from which a huge guy emerged and looked straight at them. They could not get up because they were under the machine gun sight. “The man looked at us very carefully,” said my father, “took out one grenade, then another and threw those grenades at us. Well and ….”  Life is such a simple thing, yet cruel.

What was his biggest problem when he regained consciousness? The fact that it was already winter. The Neva was icebound, and he had somehow to get to the other side to get help and skilled medical care. However, he was in no condition to walk.

True, he did manage to regain his people on this side of the river. But there weren’t many who were willing to drag him to the other side because that stretch of the Neva was exposed to artillery and machine-gun fire. There was little chance of reaching the opposite bank. However, purely by chance a neighbor of his from the house in Peterhof appeared. And this neighbor didn’t hesitate to drag him across and indeed dragged him all the way to the hospital. They both made it there alive. The neighbor waited at the hospital, made sure that he was operated on and said, “Well, now you are going to live, but I’m off to die.” And off he went.

I later asked my father if that man really did die. He said that he had never heard from him again and believed he was in fact killed. He was never able to forget that episode and it tormented him tremendously. I remember that sometime in 1960s (I don’t remember the exact year as I was still very young then), but sometime in the early 60’s, he suddenly came home, sat down and began to weep. He had run into his saviour in a shop in Leningrad. Like their earlier encounter, it was purely by chance, a one-in-a-million coincidence that both men were in the same store at the same time. They would meet again later at our home. My mother told me how she visited my father at the hospital where he lay after he was wounded. They had a small child who was only three years old at the time – that time of blockade and hunger. My father smuggled his hospital rations to her and she in turn took them home and fed their child. When he began fainting from hunger in the hospital, the doctors and nurses figured out what was going on and prevented my mother from visiting him again.

Then her child was taken from her. It was done with no prior notice, as she later recalled, in an attempt to save small children from starvation. The children were brought to orphanages for subsequent evacuation. The parents weren’t even asked.

He fell ill there – my mother said it was diphtheria – and didn’t survive. My parents were not even told where he was buried, and they never did find out. Just last year, some people I don’t know, working on their own initiative, searched through the archives and found documents about my brother. And it really was my brother, because I knew that after fleeing Peterhof from the advancing German troops, they lived with one of their friends – and I even knew the address. They lived on the so-called “Water Channel” (Vodnyj Kanal). It would be more accurate to call it a “Bypass Channel” (Obvodnyj Kanal), but in Leningrad it’s called the “Water Channel”. I know for sure that they lived there. Not only did the address where he was taken from match, but the name, surname, patronymic, and date of birth matched as well. It was, of course, my brother. The place of burial was Piskaryovskoye Cemetery. Even the exact site was specified.

My parents were told nothing of this. Obviously, other things were of higher priority back then.

So everything that my parents told me about the war was true. Not a single word was invented. Not a single day was moved. Everything told to me about my brother, the neighbor, and the German group commander – everything matched, all confirmed in an incredible way. After my brother was taken away and my mother left all alone, my father was finally able to walk with crutches and returned home. When he made his way to his building, he saw that there were orderlies carrying bodies out of the entrance. He identified one of them as my mother. He approached them and it seemed to him that she was breathing. He told the orderlies: “She’s still alive!” “She’ll pass away along the way”, they said. “She’ll not survive now.” He then attacked them with his crutches and forced them to carry her back into the apartment. They told him: “Well, we’ll do as you say, but know that we will not come here for another two, three, or four weeks. You’ll have to deal with things yourself then.” My father nursed her back to life. She survived. She lived on until 1999. My father died in late 1998.

After the blockade was lifted, they moved to the Tver province, their parents’ homeland, and lived there until the end of the war. My father’s family was quite large. He had six brothers, five of whom were killed in the war. This was a disaster for the family. My mother’s relatives also died. I was a late child as my mother gave birth to me when she was 41 years old.

Our situation was not unique. There was, after all, no family from which someone didn’t die or which didn’t suffer grief, misfortune, and tragedy. However, my parents still harbored no hatred for the enemy, which is simply amazing. To be honest, I still cannot fully understand it. Mama was generally a very kind and gentle person. I can remember her saying: “Well, what kind of hatred can one have toward these soldiers? They are simple people and they also die in the war.” It’s amazing. We were brought up on Soviet books and movies… and we hated. But she somehow did not have it in her. I can still clearly remember her words: “Well, what can you have against them? They are also hard workers, just like us. They were simply forced to go to the front.”

These are the words that I remember from my childhood.