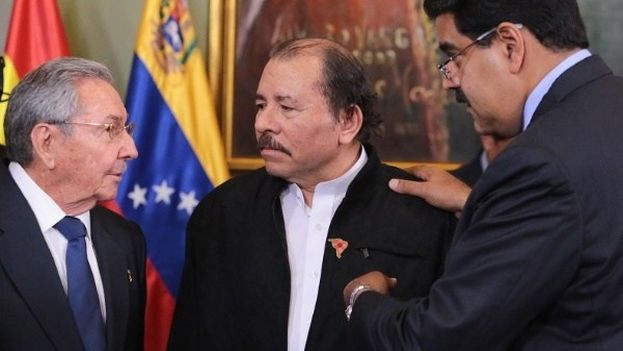 The plan includes regime change in Venezuela, Nicaragua and eventually Cuba. The removal of any Russian or Chinese interest is another point. It is a multiyear project that has bipartisan support. It will likely require military force.

The project seems to echo the “New Middle East” plan then Secretary of State Condeleeza Rice launched in 2006. It largely failed due to U.S. incompetence but left behind severely damaged states.

That the U.S. is going for such a wide ranging plan in the western hemisphere might explain why Trump is pressing to end the other military projects in the Middle East and Afghanistan.

The starting shot for the new plan, the U.S. led coup attempt in Venezuela, is already in trouble. The U.S. selected puppet Juan Guaidó had called for demonstrations in support of his coup that were supposed to take place yesterday. But even the NYT, which propagandizes for each and every regime change operation the U.S. undertakes in Latin America, could find only little evidence of support:

Mr. Guaidó also took part in protests on Wednesday at the Central University of Venezuela in Caracas, where he was swarmed by international reporters. Wearing a white lab coat, he linked arms with medical students and marched with them up a roadway, before speeding off on the back of a motorbike.The demonstration was one of a handful in the city on Wednesday, though on a smaller scale than some recent demonstrations. Some workers walked out of their jobs for hours in protest against Mr. Maduro and his government, gathering on corners through the capital.

Videos from Venezuela showed a crowd of some hundred people in the better off quarters of Caracas. Meanwhile pictures of several pro-Maduro demonstrations in various cities showed much larger crowds. New demonstrations will be held on Saturday and are likely to show similar results.

The Washington Post claims that anti-government protests took place in two of the more destitute areas of Caracas. But the report contradicts itself. It starts:

As the opposition campaign to oust President Nicolás Maduro dramatically escalated, the warren-like streets of the Puerta Caracas slum filled with pot-banging, anti-government demonstrators. A culture center run by Maduro loyalists was burned down. Hungry, beaten-down residents felt a rush of hope.Then night fell, along with the boot steps of government forces.

Twenty propaganda filled paragraphs later we learn that the described arson of a culture center took place before the coup attempt happened and likely has nothing to do with it:

The uprisings began the night of Jan. 22, with residents of Puerta Caracas banging pots and lighting dumpsters on fire. Around midnight, neighbors say, a group of hooded boys threw molotov cocktails at the culture center.Early Wednesday, family members said, Abel Pernia, 19, was heading to a doctor’s appointment when armed intelligence police officers grabbed him, shoved him against a wall and handcuffed him.
…
… [more] protests erupted in Petare last Wednesday and continued until dawn. A group set fire to barricades, threw stones and attacked an outpost of the National Guard. Security forces repelled them with tear gas as residents chanted “we don’t want food boxes! What we want is for Nicolas to leave!”

Neighbors said that criminal gangs were among the crowd and created havoc by violently confronting the police. The response was immediate.

The coup attempt was launched on January 23. The arson incident took place on January 22. The following day the police came and arrested people involved in it. More gang riots followed.

The whole story has nothing to with the coup attempt or with general protests against Maduro. It is about gang crime in some slum quarters. Gang fighting has long been a problem in Caracas. A special police force, the FAES, was set up in 2017 to get it under control.

That the Washington Post has to use an unrelated incident to proclaim that the poor people support the coup attempt shows how little real evidence it has to support that propaganda claim.

The public in Venezuela is evidently not supporting the foreign induced coup attempt. A recent poll shows that more than 80% of the people are against sanctions and other international interventions to remove President Maduro. 80% also support talks between the government and the opposition which Maduro repeatedly offered but which the coup plotters reject.

It is very unlikely that civil disobedience or demonstrations will be able to remove the government of Venezuela. The opposition simply does not have enough people on its side to create more than inconveniences.

It is also not the plan.

It is obvious that the U.S. wants a violent conflict. Either the Venezuelan military will have to launch a coup or the violence will have to be brought in from the outside.

The military has for now declared that it is not willing to do anything against the government. Other measures will have to be taken. That the Trump administration selected Elliott Abrams, Ronald Reagan’s “Assistant Secretary of Dirty Wars”, as special envoy to its puppets is telling:

The choice of Abrams sends a clear message to Venezuela and the world: The Trump administration intends to brutalize Venezuela, while producing a stream of unctuous rhetoric about America’s love for democracy and human rights. Combining these two factors — the brutality and the unctuousness — is Abrams’s core competency.

An oped by the U.S. selected dude, who was created by the U.S. regime change machine, was published in today’s New York Times: Juan Guaidó: Venezuelans, Strength Is in Unity  To end the Maduro regime with the minimum of bloodshed, we need the support of pro-democratic governments, institutions and individuals the world over.

Notice the “minimum of bloodshed”? One wonders how many thousands of dead will do.

Guaido explains the murky legal foundation for his claims to presidency:

I would like to be clear about the situation in Venezuela: Mr. Maduro’s re-election on May 20, 2018, was illegitimate, as has since been acknowledged by a large part of the international community. His original six-year term was set to end on Jan. 10. By continuing to stay in office, Nicolás Maduro is usurping the presidency.My ascension as interim president is based on Article 233 of the Venezuelan Constitution, according to which, if at the outset of a new term there is no elected head of state, power is vested in the president of the National Assembly until free and transparent elections take place. This is why the oath I took on Jan. 23 cannot be considered a “self-proclamation.” It was not of my own accord that I assumed the function of president that day, but in adherence to the Constitution.

The early election in May 2018 was held on demand of the opposition parties some of which, urged by the U.S., did not take part in it. There is no evidence of fraud that lets one doubt the results. Maduro won among several candidates with more than 60% of the votes. One might argue that has more legitimacy than some other elected people. 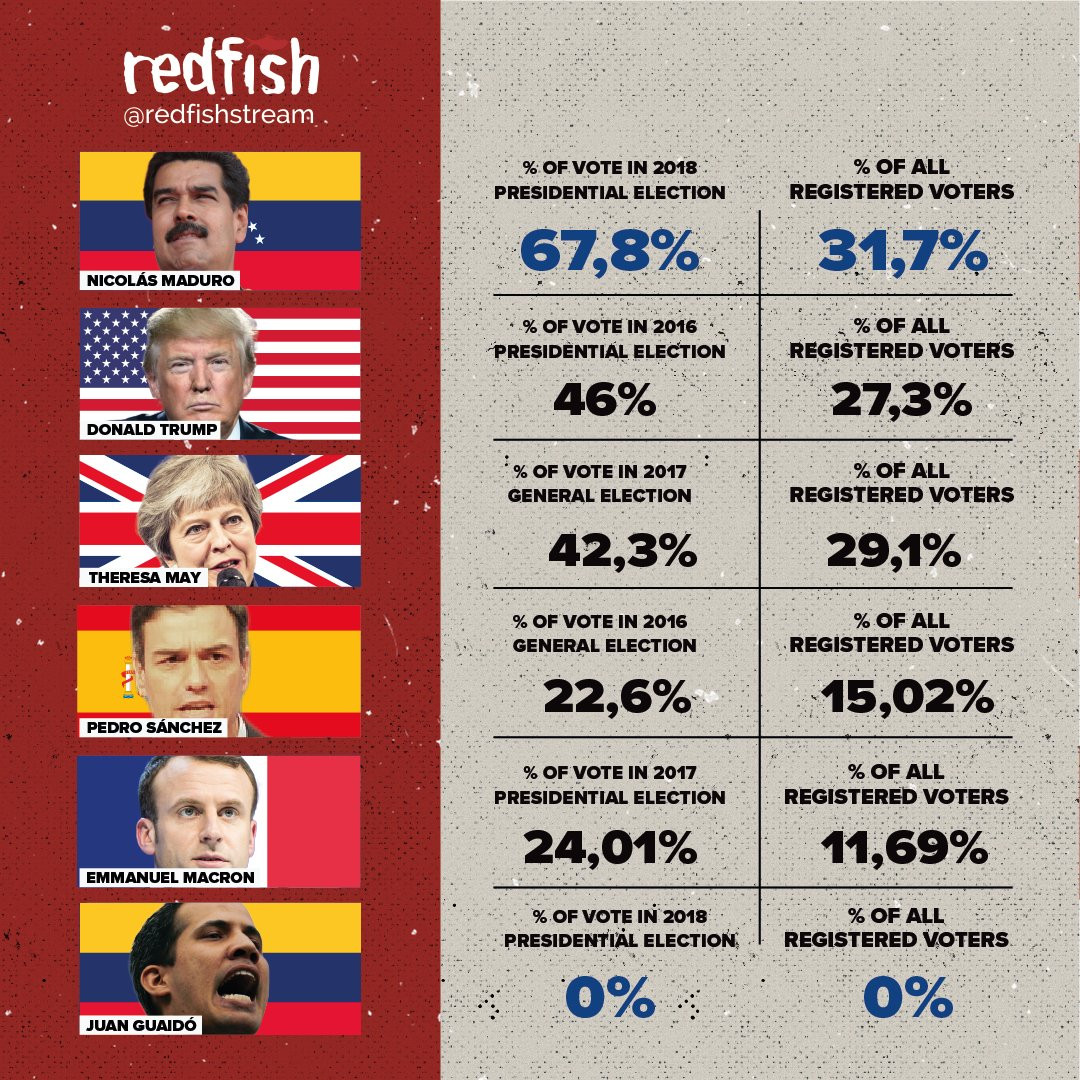 If Maduro’s first term ended on January 10 why did it take it Guaido, as head of the National Assembly, thirteen days to find that Maduro’s second term was ‘illegitimate’? Moreover, if article 233 is used as justification to temporarily usurp the presidency then Guaido has the duty to hold new elections within 30 days. So far he has not even called for them. His reasoning is not convincing at all.

Guaido goes on to say that he needs support of the military. But this does not sound like he has it:

The transition will require support from key military contingents. We have had clandestine meetings with members of the armed forces and the security forces. We have offered amnesty to all those who are found not guilty of crimes against humanity. The military’s withdrawal of support from Mr. Maduro is crucial to enabling a change in government, and the majority of those in service agree that the country’s recent travails are untenable.

He further claims, like the Washington Post above, that the gang violence before the coup attempt shows that Maduro has lost all support:

Mr. Maduro no longer has the support of the people. Last week in Caracas, citizens from the poorest neighborhoods that had been Chavista strongholds in the past took to the streets in unprecedented protests. They went out again on Jan. 23 with the full knowledge that they might be brutally repressed, and they continue to attend town hall meetings.

Guaido ends by calling for external support for his endeavor.

What he needs are billions of dollars to build up some mercenary army that will help him to overthrow the government.

The U.S. seized Venezuelan assets but will have trouble handing them to Guaido. The main asset is CITGO, which owns refineries and gas stations in the United States. But CITGO is deep in debt. Its refineries depend on the heavy oil from Venezuela. If might well go into bankruptcy in which case the debt holders will take it over. At least 49.5 % will go to the Russian company Rosneft. The legal process will take years.

So how much U.S. money is Trump willing to invest in his plan?

Venezuela will have trouble defending itself against a foreign military attack. The Maduro government is not the most competent, the military is quite corrupt, and money is scarce. China and Russia may support it with some additional loans, but are otherwise unlikely to come to its help. Cuba and Nicaragua may be willing to send troops but have little else to offer.

But the Bolivarian movement in Venezuela has millions of supporters. Most are poor people who would lose out under a new rightwing government. While the Venezuelan military may be corrupt and not very willing to fight, many people will surely take up arms to defend the gains they made under Maduro and Chavez.

It might be relatively easy to invade Venezuela and to defeat its regular military. But the following occupation would be a very difficult endeavor. The Pentagon has seen how this worked out in Iraq. It will likely warn against the use of any U.S. troops in Venezuela. Other countries will likewise be careful not to get into such a mess.

The CIA and the coup plotters can hire thousands of throat cutting thugs to do some extreme damage to Venezuela. But they have little chance to win more than a completely destroyed country.

Might that be the real aim? Is the project for the New Middle East Latin America one of complete destruction?