Mapping the consequences of inevitable sanctions on Russia 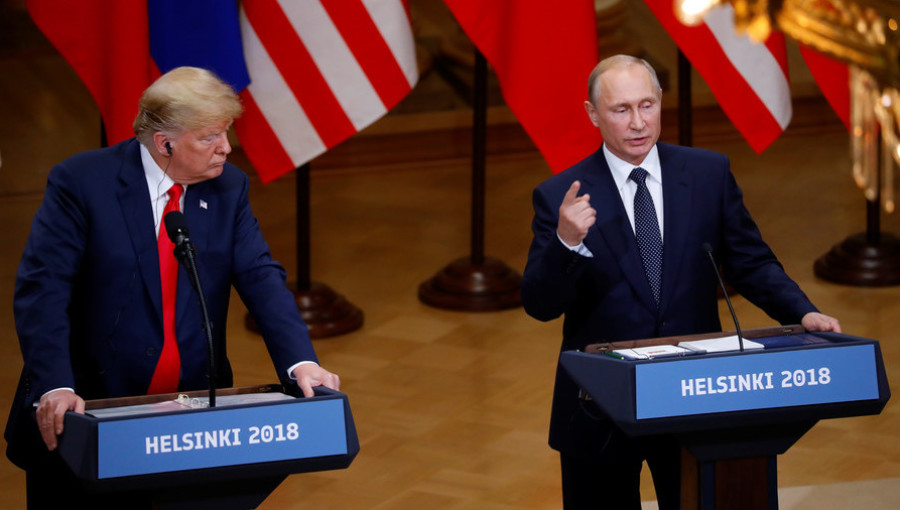 Lenin famously said “everything is connected to everything else” and with more, possibly “crushing,” sanctions due to be imposed on Russia soon the effect on the Russian economy and capital markets is profound, but not all bad.

Many factors, such as the currency, policy options and economic performance, are connected to sanctions events and threats. Below is a diagram that attempts to show the important connections for investors and companies working in Russia, as well as an attempt to sketch out how the moving parts fit together. 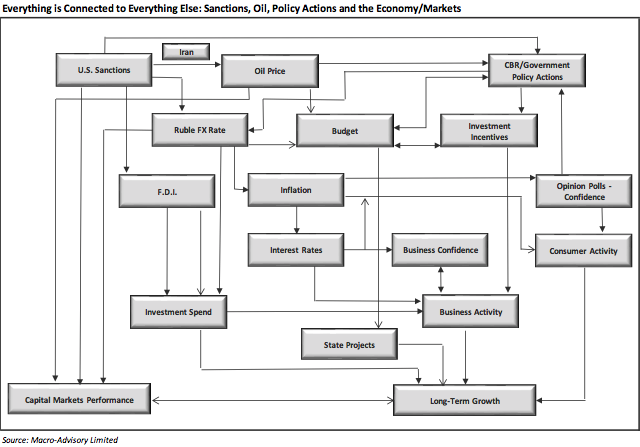 And more sanctions are coming: it is only a matter of when, and in what form, rather than if. The next round could be passed as soon as late November when the 90-day review of Russia’s compliance with the Chemical and Biological Weapons (CBW) sanction is scheduled to take place and, if Moscow is deemed not to be compliant, then President Trump must choose at least three out of the six possible punishments that have been published.

Sanctions have been a matter of fact for all involved with Russia since early 2014 but what is different this time is the relative calm while waiting for the next wave to hit. There have been no threats of major retaliation from the Duma and the ruble has pulled back to the mid-sixties against the dollar and appears parked there until the next sanctions are announced and the impact assessed. President Putin’s comment to his US counter-part is simply to “get on with it”

It is fair to say that one reason for the relative calm is a sense that conditions do not exist for the worst-case threats, such as blocking Russia using the US dollar and US financial system for transactions, being put in place and that Moscow is relatively immune from more of the same sort sanctions that it has been hit with over the past five years, including the escalation since the Countering America’s Adversaries Through Sanctions Act (CAATSA) legislation was signed by President Trump on August 2 last year.

There is a sense that Russia has not only adapted well to the sanctions but has actually used the fact of the sanctions to push through much needed monetary and fiscal changes that would otherwise have been avoided or taken much longer. Therefore, the argument goes, more sanctions will only accelerate that process.

Such thinking is clearly wishful and wrong. Sanctions are always damaging in some respect and, in the case of Russia, have resulted in a big slowdown of inward investment in recent years. Big corporations and investors that do not need to be in Russia, i.e. who are not already well established and making money in the country, have generally adopted a prudent stay away stance and have no intention of straying from that anytime soon.

But it is equally wrong to say that sanctions have not been a positive driver of change in Russia. The government would certainly have had more options to ride out the oil price collapse in 2015 and 2016 — run a bigger budget deficit and borrowed more — if it were not for sanctions. The ruble would have been defended and the big boost to economic competitiveness, resulting from the ruble collapse, would not have been seen. Russia would not today, for example, be the world’s biggest exporter of wheat and sugar if not for the response to sanctions. It also would not have the world’s sixth lowest level of national debt and a trade surplus approaching $200bn.

Another benefit from the sanctions, both direct and indirectly, is that Russia finally had to stop talking about weaning the economy off oil dependency, and vulnerability, and do something about it. In 2013 the federal budget needed $115 per barrel to balance. This year it should balance at $53 per barrel and is on course to balance at $44 per barrel in 2021. The so-called Fiscal Rule, which diverts all surplus oil wealth to the National Fund, and thus available to fund long-term projects and investment incentives, had long been discussed as an ambition but it took sanctions to force the issue and make it happen.

But just how badly will sanctions affect the economy and business?

Ruble. The ruble exchange rate only has a correlation with the oil price when there is no sanctions event or sanctions threat. In the case of either of these factors the ruble entirely responds to the event and ignores, for example, the oil price to, which it previously had the closest correlation. The graph below shows the effect of the April 6 round of sanctions, moving the exchange rate to the 62-64 rate against the dollar, and the August sanctions, which briefly pushed the rate to 70 before settling back in the 65-68 range while waiting to see what happens next. 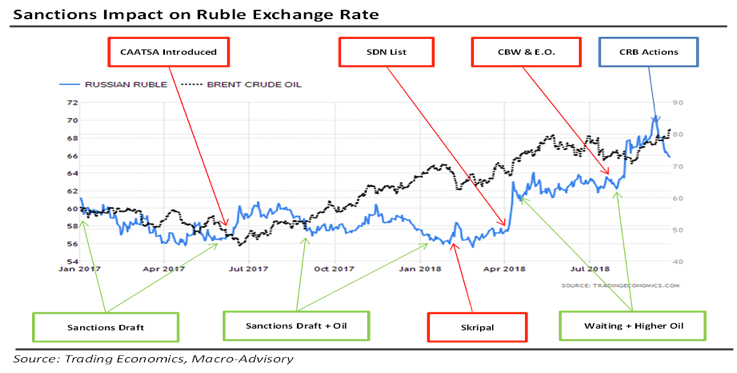 Budget       The budget balance (also the trade balance, current account and capital account) are directly impacted with the value of oil tax revenue, which makes up approximately 38% of total tax revenue, and the conversion rate used from dollars to rubles. The Budget Rule means that there is now no direct correlation between economic growth and the value of oil receipts. The surplus, above $42 per barrel for this year, is diverted monthly to the Finance Ministry and then, at the end of the year, some will be returned to cover the deficit and the remainder made available for funding long-term projects. This new model, plus associated tax changes in the oil sector, has come directly as a result of the need to respond to both sanctions and also the address the exposure to oil price volatility.

Oil. The diagram also shows one of the other major contradictions in US policy; the even greater determination to sanction Iran and stop its oil exports. That action, which potentially steps up a gear on November 4, is one of the major reasons why oil is trading close to $80 per barrel, a level at, which the Russian budget will gain a surplus of over $25bn this year. The Iran sanctions to a large extent make the Russian sanctions a whole lot less damaging.

Incentives. Because of the sanction fears inward investment is slower and investors more fearful. The government has been forced to respond with a range of incentives to attract investment, both from Russians and foreigners. More incentives, e.g. PPP schemes, are expected in the next twelve to twenty-four months as opportunities under the May Decrees program are made available, or need to be.

Consumer. Russian households have borne the brunt of the recession and slowdown since 2014. Real disposable incomes have only just recovered and despite a jump in real wages, retail sales and other consumer services have been also slow to recover. There are, however, some exceptions such as the double-digit rise in vehicle sales last year and this year and the continuing boom in e-commerce. The consumer is also indirectly impacted with the rise in inflation (this is the number one fear amongst Russians, registering 72% of those polled), higher debt service costs and the weak ruble eroding savings.

Business. The impact on business is also related to interest rates, the weak ruble (for those having to import parts or products) and the generally poor confidence outlook. On the other hand, exporters have benefited from the weak ruble (sanctions plus government policy) and because of the ban on imported food (counter-sanctions of August 2014).

Capital markets. The dollar denominated equity indices (RTS and RDX) are very sensitive to sanctions events. During a “quiet news period”, the previously close correlation with the oil price and government policy events has returned. But, since 2014, it has been sanctions news and the impact on the ruble, which has combined to be the key driver of these indices. The ruble denominated MICEX is less volatile and much less impacted by sanctions or the ruble. Earnings and dividends are the traditional drivers of this index. Over the first eight months of this year, MICEX gained 11% while the two dollar-denominated indices lost close to 6% each. If the next round of sanctions are deemed “mild” and the ruble appreciates, then the dollar indices will appreciate strongly.

The debt market had been largely immune to the sort of volatility seen in the equity indices but that changed in August when the prospect of a ban on US (and by default EU) investors in Russian sovereign and other corporate debt had been proposed and discussed openly in Congress. Risk-adverse funds have been reducing their Russia exposure and the yield gap with peers has widened.

So again, we are waiting to hear what comes out of Washington and to then assess the impact on the ruble, the economy and the stock market. Truth be told, most people are getting fatigued by the regular missives. If bad enough we will again see a knee-jerk adjustment in the ruble exchange rate and in the dollar-denominated equity indices. Then life moves on. The government will adjust its spending policies, the Central Bank will act to prevent a spike in inflation and Russia will export more wheat, sugar and a lengthening list of other agriculture and food products. The nightmare scenario for Moscow is not more sanctions directed at it but an easing of US sanctions against Iran. And that is about as likely as a sunny December day in Moscow.

How Far On Top