Brazil’s Polarizing New President, Jair Bolsonaro, in His Own Words 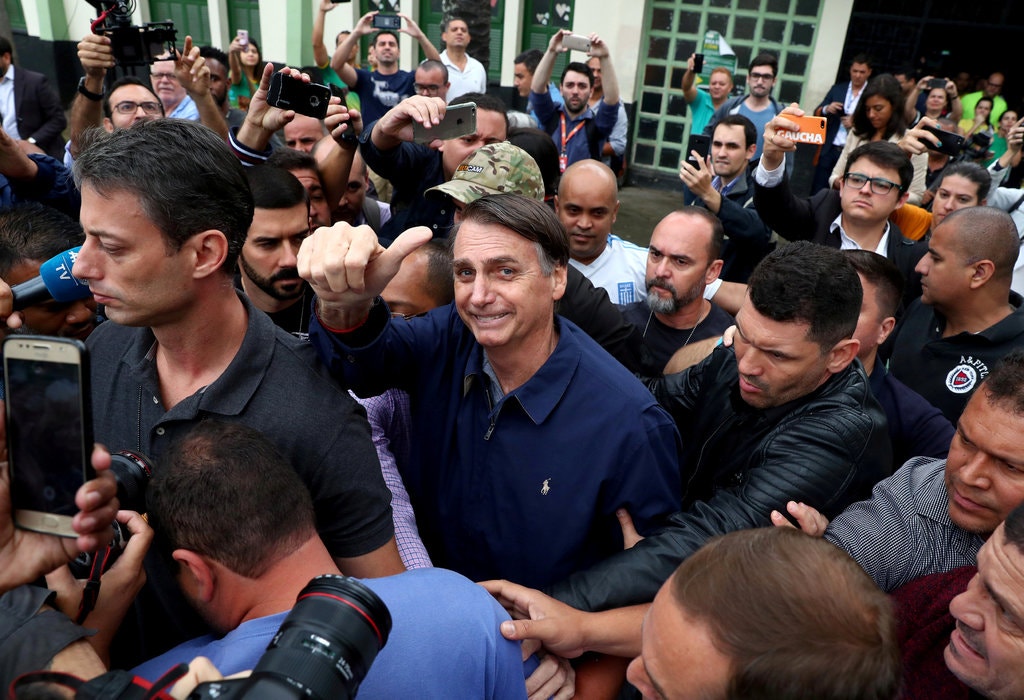 Jair Bolsonaro’s climb to power has been marked by divisive rhetoric and offensive speech that has thrilled followers and appalled critics in equal measure.

The far-right former army captain’s rise has left some baffled. Mr. Bolsonaro served seven consecutive terms in Congress, with little to show for his time there; very few of his bills were approved.

But many Brazilians, angered by their country’s economic crisis, soaring violence and corruption scandals, interpreted his long list of caustic remarks as blunt but bracingly honest talk from a man willing to say — and do — whatever was necessary to bring about the change they craved.

On Women, Race and Sexual Orientation

Mr. Bolsonaro has described having a female child as a “weakness,” and has said he would not treat or pay women the same as men in the workplace.

“Because women get more labor rights than men, meaning they get maternity leave, the employer prefers to hire men … I would not employ [women equally]. But there are a lot of competent women out there.”

“I would not rape you because you are not worthy of it.”

In June 2011, he said he would “rather his son die in a car accident than be gay,” adding:

“If a gay couple came to live in my building, my property will lose value. If they walk around holding hands, kissing, it will lose value! No one says that out of fear of being pinned as homophobe.”

In April 2017, Mr. Bolsonaro spoke about visiting traditional Afro-Brazilian communities. He described the weight of the residents using the word “arrobas,” an outdated unit used to weigh cattle and agricultural products.

“The lightest Afro-descendant there weighed seven ‘arrobas’. They don’t do anything. They are not even good for procreation.”

In April 2016, when President Dilma Rousseff’s impeachment was put to a vote in Congress, Mr. Bolsonaro dedicated his vote to a colonel who ran a torture center during the country’s military dictatorship in which Ms. Rousseff was tortured in her youth:

“In memory of Col. Carlos Alberto Brilhante Ustra, the terror of Dilma Rousseff … I vote YES.”

After criticizing Brazil’s government during a 1999 interview, Mr. Bolsonaro was asked whether he would shut down Congress if he were president. He said:

“There is no doubt. I would perform a coup on the same day. [Congress] doesn’t work. And I am sure that at least 90 percent of the population would celebrate and applaud because it doesn’t work. The Congress today is useless … lets do the coup already. Let’s go straight to the dictatorship.”

In the same interview he also said:

“Elections won’t change anything in this country. Unfortunately, it will only change on the day that we break out in civil war here and do the job that the military regime didn’t do: killing 30,000. If some innocent people die, that’s fine. In every war, innocent people die. I will even be happy if I die as long as 30,000 others go with me.”

At a rally in São Paulo on Oct. 21, Mr. Bolsonaro vowed to imprison or exile his political opponents once in office:

“This time, the cleanup will be even greater. This group, if they want to stay, they will have to abide by our laws. Either they stay out or they will go to jail.”

Mr. Bolsonaro has said he would curtail efforts to protect the environment and indigenous land:

“We are going to fuse together the Ministry of Agriculture with the Ministry of the Environment … We need to put a stop to the demarcation of indigenous land … indigenous people want to rent out the land, they want to be able to do business, they want electricity, a dentist to remove the stumps of teeth from their mouths … indigenous people are human beings like us. They don’t want to be used for political purposes.”

Mr. Bolsonaro has also said that there were far too many indigenous reservations in the Amazon:

“Our Amazon is like a child with chickenpox, every dot you see is an indigenous reservation … and the Brazilian people applaud [demarcation of indigenous land]. Look at these people, no political strategy!”

Photo legend: “Jair Bolsonaro in Rio de Janeiro this month. He has long been known for making statements that offend large segments of society. Pilar Olivares/Reuters“