Is Bolsonaro an American Stooge? 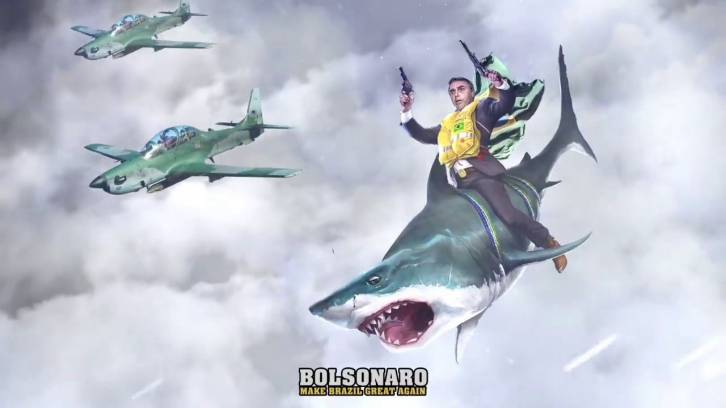 Here are some basic things worth bearing in amidst the various powerful takes floating around.

Campaign rhetoric is one thing – the reality of navigating international geopolitics is another. It is worth noting that while Americanophilia started off high at the start of many Brazilian right-wing administrations, it never consistently stayed high – not even under the junta, which gradually floated back to neutrality (and which apparently gets a much worse rap than it deserves). Our Brazilian commenter Alin has much to say about this (his comment is reprinted below).

With no ensuing freebies from the Americans – Trump isn’t exactly the giving type – Bolsonaro’s Brazil can be expected to drift back into the BRICS multilateralism framework.

One possible model for future developments would be the evolution of US-Indian relations since the ascent of Modi, which started off with WaPo describing it as a “partnership for the 21st century” to Trump threatening sanctions for buying Russian S-400′s.

Talk of Bolsonaro being a Wall Street stooge, or a CIA asset, or whatever, is complete leftist nonsense. Brazil might not be the most K-selected country, but with the world’s third largest population of white people after the US and Russia, it’s hardly a banana republic either. It produces more vehicles than France, has a strong indigenous financial sector, and a successful aerospace industry (Embraer). It’s not the sort of place where the US can just sweep in and buy up the elites en masse. And as Duterte shows, even CIA assets in countries much closer to banana republic level have a habit of going maverick.

Bolsonaro was elected not because of a CIA/Russian plot, but because of Brazilian domestic affairs, such as economic mismanagement, crime, and weariness with corruption.

Bolsonaro’s economic program involving moderate privatization, a 20% flat tax, and pensions reform (pensions are expected to consume the entire Brazilian budget by 2022-24 if nothing is done) seems to be in line with what Brazil’s over regulated economy needs (125/190 on World Bank’s Ease of Doing Business ranking).

The tough on crime and gun freedoms policy must be appreciated in the context of a crime situation that is out of control thanks to SJW activists (e.g. “If you are underage, no matter the crime you commit, you only go to a rehabilitation center until you’re 18 and then you’re set free WITH A CLEAN RECORD. We have plenty of cases of drug dealers of 17 years and 364 days of age killing, say, girlfriends they suspected of cheating them, then walking scot free, with a clean record, the very next day.“)

While Bolsonaro formally remains a Catholic, he is associated with and associates with evangelicals. This is something that doesn’t sit well with many people, the more so since it is usually associated with Israel worship (and indeed, he has said that Palestine isn’t a country and wants to move the Embassy to Jerusalem). However, as Lance Welton writes at VDARE, pentecostalism has developed deep and genuine roots in Brazil in the past half century. This is not some marginal American import (such as the Baptism of former Ukrainian interim President Turchynov in 2014). However, as another Brazilian commenter Dumbo points out, it is Catholicism that screwed up by embracing liberation theology in the 1970s-80s, with the result that the poor embraced socially conservative evangelicalism instead.

So in short I don’t buy into the doom-mongering going on amongst some lefty anti-imperialists over how Brazil has become an American colony or whatever.

On Bolsonaro’s pro-Americanism, the issue is quite complex. Let me again type a loooong comment on this.

(1) Brazil traditionally had excellent relations with the United States from independence to the mid-20th century. American historian Bradford Burns named his book about it “The Unwritten Alliance”. Just to exemplify, since I guess these are facts few people know: (a) Secretary of State Seward asked the Brazilian Emperor to offer his mediation between the federal government and the seceding states in 1861, just before Fort Sumter. Emperor Pedro II wisely declined [Brazil was an Empire under the House of Braganza-Hapsburg, 1822-1889]; (b) the first ever visit abroad of a sitting American Secretary of State was that of Elihu Root to Rio de Janeiro in 1903; (c) Brazil entered both world wars in support of the U.S. In WWII, we sent 30,000 men to the Italian front, and would have sent 150,000 if the war hadn’t ended too soon; (d) the original configuration of the United Nations Security Council, as prepared by President Roosevelt, had Brazil as a permanent member. It came to nought because of Soviet strong opposition to the idea, British milder opposition and, above all, Roosevelt’s death before the issue was decided.

(2) All this meant that Brazil had very high expectations about how the relationship would be after victory in WWII. We imagined it would go on as before, with America as our friend and interested in our affairs, supporting our development plans. Of course, by now the U.S. was a world empire and Latin America just one region of the world, far from the stratetic hotspots, and home to no credible threat to America. When the Marshall Plan was implemented, Brazil expected to receive something like it as well – and, of course, didn’t.

(3) During the Cold War, as expected, the Brazilian right was pro-American and the left pro-Soviet, so the net result was a tendency towards a neutralism slightly tilted towards the US. But the Brazilian right continued to pine after the “lost good years” of close relationship with America and hope it could be restored. Of course, it was disappointed every time. When the military took over in 1964, they turned Brazil strongly towards the U.S. Hopes dashed, they turned again toward neutralism after 1967, even more strongly after 1974. After democracy returned in 1985, again we hoped for stronger American support (those were the years of the Latin American external debt crisis), and again this didn’t come. When a mild programme of liberalization was implemented in the 1990s, new hopes, again dashed. When Brazil then suffered a currency crisis and needed an IMF bailout (January 1999), the US was unconcerned, just a few months after strongly intervening to bailout Yeltsin’s Russia. (I remember reading a newspaper account that the Brazilian negotiator asked his American counterpart why the US was being so unhelpful, and heard the answer “because unlike the Russians you don’t have nuclear warheads aimed at our cities”).

So the track record of Brazilian right or rightish governments is to pin high hopes on the US, fail, and then correct course. I believe Bolsonaro will repeat this cycle once again. My guess is that he hopes/expects that his general anti-establishment stance will open doors for Brazil in Trump’s Washington and that he’ll have U.S. support for his agenda, especially on the economic front. So his pro-Americanism is really genuine, within the old tradition of the Brazilian right, particularly now that Trump is president. But since Latin America continues to barely register in Washington and since Brazil continues to have no nuclear warheads, Bolsonaro is sure – IMHO – to be disappointed. Then he’ll turn the country back towards a more neutral position, give a higher profile to the BRICS, etc. We’ll see.