Saudi Arabia Gets a Friend in Need – Russia 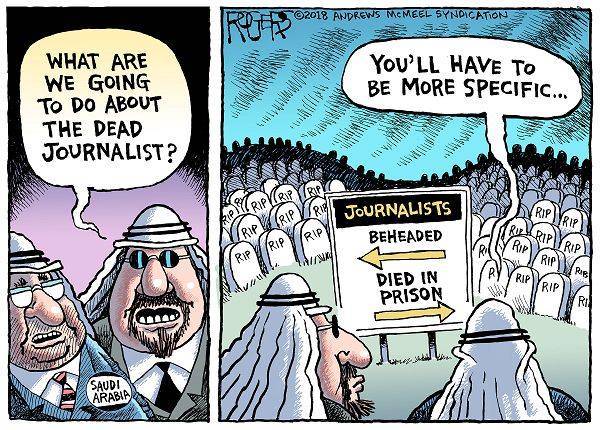 It goes without saying that oil has been central to military power and economic life in modern history. Control of oil has been a key source of power and policy in the Cold War. There was even a top-secret US government plan to ravage the Middle East oil industry in the event of the former Soviet Union gaining control of it. The CIA called it the “denial policy”. It was hatched in 1948 during the Berlin Blockade – whereby, oil wells would be plugged, equipment and fuel stockpiles destroyed, refineries and pipelines disabled to ensure that the USSR never got hold of the Middle East’s oil resources.

An analyst has written, “The history of this top secret U.S. government plot is a tumultuous mix of Arab nationalism, Big Oil and the CIA on the most oil-rich chunk of real estate on earth. Fundamentally, it is a tale of the growing importance of Middle Eastern oil and the West’s early thirst to control it.”

Therefore, much dramatic irony laces the interview given by the Saudi Minister of Energy Khalid Al-Falih to the Russian news agency TASS at the present critical juncture when on the issue of the Jamal Khashoggi affair, the United States’ 70-year old alliance with Saudi Arabia hangs on the abyss.

When Russian President Vladimir Putin’s legacy is recorded in his country’s history, the breakthrough in the relations with Saudi Arabia will stand out as a personal achievement. Prompted by a gloomy backdrop of precipitous crash in oil prices to $20-30 per barrel in 2014 (compared to $100 just three years ago), Russia began tentative outreach to Saudi Arabia as to how to retrieve a seemingly hopeless situation that sharply reduced the income of the two energy superpowers from their oil exports. The game changer was a meeting in September 2016 in Hangzhou, China, when on the sidelines of the G20 Summit, Putin met the Saudi Crown Prince Mohamed bin Salman (MBS, as is commonly known.)

That was in the final phase of the Barack Obama era. For Russia, 2016 was an extremely difficult year, coping with the western sanctions and a steep fall in income from oil exports. Saudis also for the first time were feeling a “cash crunch”. Putin worked on that congruence to rapidly build up a strategic partnership between Russia and Saudi Arabia, which has enabled the two superpowers to keep market prices stable. (The price of oil estimated in the Russian budget for the current year is around $53 per barrel, whereas oil is presently hovering around $80 per barrel.)

Meanwhile, the Russian-Saudi axis took the nature of an institutional forum known as OPEC+, which is expected to have a full-fledged secretariat soon alongside the OPEC secretariat in Vienna, to be headed by Russia. The two countries began by tentatively marking production level for oil producing countries at a six-month interval, but the Russian-Saudi axis has since acquired such traction already that they are contemplating a long-term, open-ended agreement to continuously, permanently finesse the supply and demand for oil to keep the prices stable and provide underpinning for growth of the world economy.

The Putin-MBS personal equation played a big part in al this. MBS has been a frequent visitor to Moscow and his last visit for the opening ceremony of the FIFA World Cup 2018 was the occasion when he met Putin and the Saudi and Russian thinking veered round to search for a framework for the long-term coordination in the oil market.

In effect, Saudi Arabia and Russia are assuming the leadership of the oil producing countries and helping them take consensus decisions. At the same time, Russian-Saudi bilateral energy cooperation has also made a solid beginning. The two countries have investment plans within the ambit of the Russian Direct Investment Fund (RDIF). Saudi Arabia is expected to take a big stake in the LNG project Yamal Phase 2 in the Russian Arctic with equity next only to Novatek. They are discussing swap deals in countries such as India. (Interestingly, Al-Falih sees good prospects for Russian companies’ involvement in Aramco’s ambitious downstream strategy.)

Without doubt, the TASS interview with Al-Falih has been timed to remind the international community that it will be catastrophic to isolate Saudi Arabia over the Khashoggi affair. (Incidentally, RDIF issued a statement on October 20 welcoming the “decisive actions” taken by the Saudi authorities on the Khashoggi case and pointedly affirming support for the Crown Prince’s flagship project known as Vision 2030.) The signals from Moscow so far have scrupulously avoided any criticism or censuring of Saudi Arabia, unlike the US and European countries.

The TASS interview and the publication of the full transcript obviously has the Kremlin’s approval. It conveys as explicitly as possible under the circumstances that Russia has no intentions whatsoever to turn its back on Saudi Arabia over the Khashoggi affair. One may say, Russia could even be a stakeholder in the preservation of the present Saudi leadership hierarchy. As I said in the beginning, “black gold” plays a big part in geopolitics – and history has not ended in Russia’s relations with the West.

I wrote in the context of the historic agreement between Putin and MBS at Hangzhou two years back (Pay heed to the butterfly effect of Putin-Salman oil deal in Hangzhou, September 7, 2016, Asia Times):

“An understanding between Russia and OPEC holds the potential to completely transform the geopolitical alignments in the Middle East. First and foremost, Russia aspires to replace the US from its 70-year old pivotal status as Saudi Arabia’s number one partner in energy. This shift cannot but impact petrodollar recycling, which has been historically a robust pillar of the western financial system… Washington faces the unpleasant prospect of a strategic retreat in the Middle East unless it can mobilize a determined comeback. But then, doubling down in the Middle East means taking the eye off the re-balance in Asia, which, in turn, will be fraught with long-term consequences.”

Just an afterthought: Can it be mere coincidence that the West is gunning for MBS today? All attention is on what happened to Jamal Khashoggi. But what really happened in the run-up to his ghastly murder in the Saudi Consulate in Istanbul we may never get to know. Can it be comparable to the mistaken impression Saddam Hussein received that Washington would condone his occupation of Kuwait? There are no easy answers.

The fact of the matter is that the Putin-MBS understanding has blossomed into a veritable alliance and it has great potential to redraw the battle lines between the West and Russia. Putin has made no bones that Russia is moving out of transactions in dollar currency. If Russia and Saudi Arabia at some point begin to trade in non-dollar currencies, it will be a fatal blow to the western banking system. (China has also been pressing Saudi Arabia for trading in yuan currency.)

On top of it all, Saudi Aramco’s IPO is pending. (Saudi Arabia believes that the capital market will value Aramco at some $2 trillion, making it the world’s most valuable publicly traded company.) The Saudi Minister disclosed in the TASS interview that the listing is expected in 2021 and hinted that New York Stock Exchange may not be in the Saudi consideration zone. He flagged that the listing has to be in a “friendly safe jurisdiction” – alluding to the likely claims in US courts for Saudi compensation to the families of victims in the 9/11 attacks.

Reports have appeared that preparations are under way for a visit by Putin to Saudi Arabia. All in all, what emerges is that Russia is standing up to be counted as a friend when Saudi Arabia needs it most. Surely, the Russian support provides much “strategic depth” to the Saudi regime at this juncture when it faces an existential crisis – especially MBS.

How to Lose a Proxy War with Russia