How Far On Top 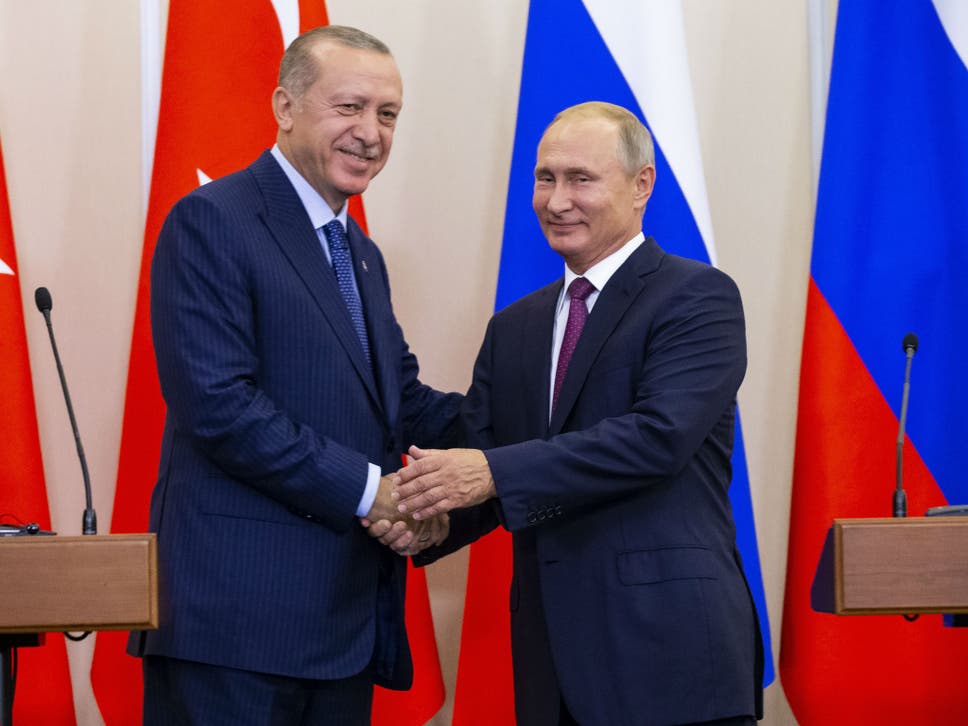 It is difficult to remember now, when Russia is being portrayed in the west as an aggressive predatory power threatening everybody, the extent to which it was marginalised seven years ago when Nato was carrying out regime change in Libya

A ceasefire seldom gets a good press. If it succeeds in ending violence or defusing a crisis, the media swiftly becomes bored and loses interest. But if the fighting goes on, then those who have called the ceasefire are condemned as heartless hypocrites who either never intended to bring the killing to an end or are culpably failing to do so.

Pundits are predictably sceptical about the agreement reached by Russian president Vladimir Putin and Turkish president Recep Tayyip Erdogan in Sochi on Monday to head off an imminent offensive by President Bashar al-Assad’s forces directed against rebels in Idlib province. This is the last enclave of the armed opposition in western Syria which has lost its strongholds in Aleppo, Damascus and Daraa over the past two years.

Doubts about the accord are understandable because, if it is implemented, the anti-Assad groups in Idlib will be defanged militarily. They will see a demilitarised zone policed by Russia and Turkey eat into their territory, “radical terrorist groups” removed, and heavy weapons ranging from tanks to mortars withdrawn. The rebels will lose their control of the two main highways crossing Idlib and linking the government held cities of Aleppo, Latakia and Hama.

What is most interesting about the agreement is less its details than what it tells us about the balance of forces in Syria, the region and even the world as a whole. Fragile it may be, but then that is true of all treaties which general Charles de Gaulle famously compared to “young girls and roses – they last as long as they last”. Implementation of the Putin-Erdogan agreement may be ragged and its benefits temporary, but it will serve a purpose if a few less Syrians in Idlib are blown apart.

The Syrian civil war long ago ceased to be a struggle fought out by local participants. Syria has become an arena where foreign states confront each other, fight proxy wars and put their strength and influence to the test.The most important international outcome of war so far is that it has enabled Russia to re-establish itself as a great power. Moscow helped Assad secure his rule after the popular uprising in 2011 and later ensured his ultimate victory by direct military intervention in 2015. A senior diplomat from an Arab country recalls that early on in the Syrian war, he asked a US general with a command in the region what was the difference between the crisis in Syria and the one that had just ended with the overthrow of Muammar Gaddafi in Libya. The general responded with a single word: “Russia.”

It is difficult to remember now, when Russia is being portrayed in the west as an aggressive predatory power threatening everybody, the extent which it was marginalised seven years ago when Nato was carrying out regime change in Libya.

Russia was in reality always stronger than it looked because it remained a nuclear superpower capable of destroying the world after the fall of the Soviet Union in 1991 just as it was before. It should be difficult to forget this gigantically important fact, but politicians and commentators continue to blithely recommend isolating Russia and pretend that it can be safely ignored.

The return of Russia as a great power was always inevitable but was accelerated by successful opportunism and crass errors by rival states. Assad in Syria was always stronger than he looked. Even at the nadir of his fortunes in July 2011, the British embassy in Damascus estimated that he had the backing of 30 to 40 per cent of the population according to The Battle for Syria: International Rivalry in the New Middle East by Christopher Phillips, which should be essential reading for anybody interested in Syria. Expert opinion failed to dent the conviction among international statesmen that Assad was bound to go. When the French ambassador Eric Chevallier expressed similar doubts about the imminence of regime change he received a stern rebuke from officials in Paris who told him: “Your information does not interest us. Bashar al-Assad must fall and will fall.”

Such wishful thinking and flight from reality continues to this day. Miscalculations by Washington, Paris and London have provided Putin with ideal political terrain on which to reassert the power of the Russian state. The agreement signed by Russia and Turkey last Monday deciding the future of Idlib province is a token of how far Russia has come out on top in Syria. Putin is able to sign a bilateral agreement with Turkey, the second largest military power in Nato, without any reference to the US or other Nato members.

The accord means that Turkey will increase its military stake in northern Syria, but it can only do so safely under license from Moscow. The priority for Turkey is to prevent the creation of a Kurdish statelet under US protection in Syria and for this it needs Russian cooperation. It was the withdrawal of the Russian air umbrella protecting the Kurdish enclave of Afrin earlier this year that enabled the Turkish army to invade and take it over.

As has happened with North Korea, President Trump’s instincts may be surer than vaunted expertise of the Washington foreign policy establishment and its foreign clones. They have not learned the most important lesson of the US-led intervention wars in Iraq and Syria which is that it is not in western interests to stir the pot in either country. Despite this, they argue for continued US military presence in northeast Syria on the grounds that this will weaken Assad and ensure that any victory he wins will be pyrrhic.

Everything that has happened since 2011 suggests the opposite: by trying to weaken Assad, western powers will force him to become more – not less – reliant on Moscow and Tehran. It ensures that more Syrians will die, be injured or become refugees and gives space for al-Qaeda clones to reemerge.

Russian dominance in the northern tier of the Middle East may be opportunistic but is being reinforced by another process. President Trump may not yet have started any wars, but the uncertainty of US policy means that many countries in the world now look for a reinsurance policy with Russia because they are no longer sure how far they can rely on the US. Putin may not always be able to juggle these different opportunities unexpectedly presented to him, but so far he has had surprising success.

Photo legend: The return of Russia as a great power was always inevitable but was accelerated by successful opportunism and crass errors by rival states ( AP )