Trump Takes the Cake: That Awful Moment When it Really Hits You That the World’s Most Powerful Country is run by the World’s Stupidest Man 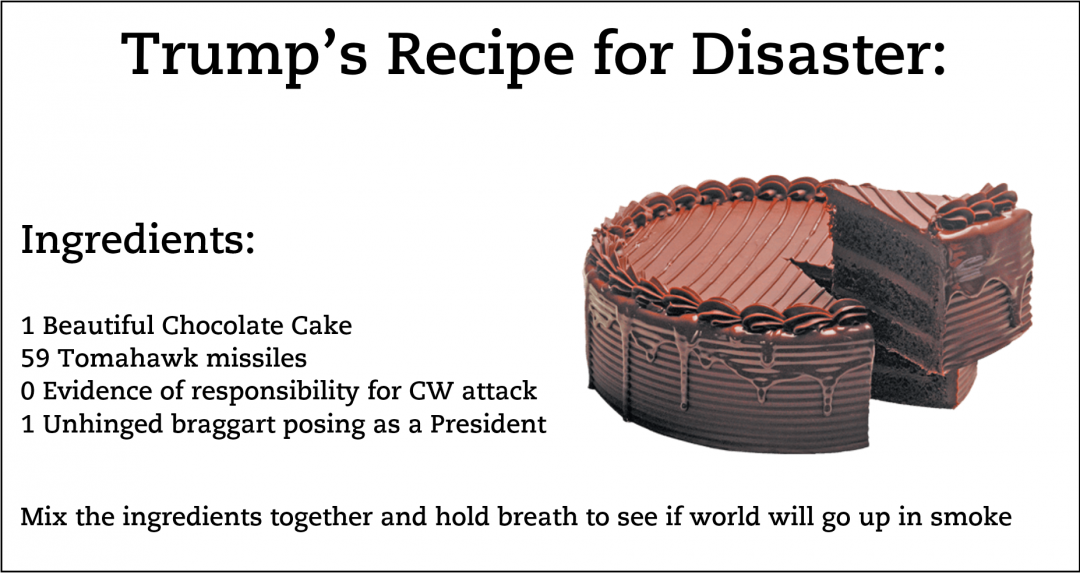 You need to see it to know the calibre of the man who is now sending an armada to the Korean peninsula, who bombed Syria before any facts had been established, and who is now the prisoner of the Deep State that he promised to stand up to. I have posted the video at the bottom, but here is a transcript of the exchange that took place after the woman posing as a journalist asked the man posing as a President what happened in the run up to his Tomahawk tantrum:

“I was sitting at the table. We had finished dinner. We’re now having dessert. And we had the most beautiful piece of chocolate cake that you’ve ever seen, and President Xi was enjoying it. And I was given the message from the generals that the ships are locked and loaded, what do you do? And we made a determination to do it, so the missiles were on the way. And I said ‘Mr. President, let me explain something to you.’ This is during dessert. ‘We’ve just fired 59 missiles,’ all of which hit by the way, unbelievable, from you know, hundreds of miles away, all of which hit, amazing.”

“So incredible. It’s brilliant. It’s genius. Our technology, our equipment is better than anybody by a factor of five. What we have in terms of technology, nobody can even come close to competing…So what happened is I said, ‘We’ve just launched 59 missiles, heading to Iraq.”

At this point the woman posing as a journalist interjected by noting the strikes were launched against a country called Syria, and not the one called Iraq. And so Mr Trump continued:

“Yes. Heading toward Syria. And I want you to know that, because I didn’t want him to go home. We were almost finished. It was a full day in Palm Beach. We’re almost finished, and I — what does he do, finish his dessert and go home and then they say, ‘You know, the guy you just had dinner with just attacked a country?’”

“So he paused for 10 seconds and then he asked the interpreter to please say it again. I didn’t think that was a good sign. And he said to me, ‘Anybody that uses gases … but anybody that was so brutal and uses gases to do that young children and babies, it’s OK.’ He was OK with it. He was OK.”

If I had written that as satire, you wouldn’t believe it, would you? He just bombed Syria before an investigation had taken place, before any proper evidence could possibly have been collected, and he’s talking about “beautiful chocolate cake”? He just bombed a country which is allied with a country armed with 8,000 odd nuclear weapons and he’s waxing lyrical about cake? Aaaggghhh! What was in that cake? Americans, I beg you to launch an immediate petition to prevent your President from being given any more chocolate cake! I mean think what might happen if he gets his chops around a gateau! Boom!

The award for the dumbest moment is too close to call. Was it the moment where the woman posing as a journalist expresses amazement that Tomahawks can hit their targets “unmanned”? Wow, bet you didn’t know that other countries rely on kamikaze soldiers to ride their missiles to their destination? Just shows their disdain for human rights, doesn’t it? Or was the dumbest moment when the man posing as President seems to think he had bombed Iraq? Iraq? Iran? Syria? It’s all the same to me.

As for the most revolting part of this nauseating show, what do you think? The bragging about the cake? The bragging about the missiles and how superior US technology is? That’s almost funny. He said that the missiles all hit their target. Well, if they did, then they can’t be all that powerful can they? The military airport they hit was fully functioning again within 24 hours. But of course he knows that they didn’t all hit their target. Only 23 of them did. Or perhaps he doesn’t yet know this because his generals are wondering how to relay this information to this arrogant braggart without him having another hissy fit.

Perhaps the most nauseating moment was the attempt to make out that the Chinese President was OK with it? Not according to Chinese State media in the days after he wasn’t, but he probably didn’t want to spoil that “beautiful chocolate cake” moment they were having by being rude (sidebar: the sight of a President who has massively upped support for Saudi Arabia’s vicious war on Yemen, which apparently kills babies, appealing to the humanitarian side of the Chinese President, whose Government runs “forced labour educational correction camps”, to justify his actions is what’s known in the trade as irony on stilts).

For me, the most nauseating thing about it all is the sight of this unhinged imbecile treating the most dangerous ratcheting up of tensions in the world like it was an after-dinner party game:

“Oh Melania it was wonderful. We had such a wonderful time. After the main course they brought in the most delicious chocolate cake that you ever did see. And then after that we all sat around playing charades — sorry I meant bombing a sovereign state on highly spurious grounds. You really should have been there.”

I had suspected as much already. Now my suspicions have been confirmed. The most powerful nation in the world is now being run by the stupidest man on the planet. I only wish it had been a fruitcake!

Dollar and Gold and Crypto-Currencies