Neither Trumpian nor Brexiteer

Latin America has different worries from the United States and Europe

THE year since The Economist last published the results of the wide-ranging Latinobarómetro survey of Latin American public opinion has been an eventful one. In three countries, voters rebuked populist left-wing governments: Argentines elected a centre-right president; Venezuelans and Bolivians used non-presidential votes to undermine the incumbents. Peru chose Pedro Pablo Kuczynski, a 77-year-old ex-banker, as president over the mildly populist Keiko Fujimori, daughter of a former strongman, Alberto Fujimori, who is in jail. The Dominican Republic re-elected its centre-right president, Danilo Medina. Only Guatemalans voted for a miracle cure. They elected as president a comedian with no political track record, Jimmy Morales, mainly because voters believed his claim to be “not corrupt”.

Latin pragmatism looks like a welcome contrast to the rise in support for fringe candidates and causes in Europe and the United States. But this year’s Latinobarómetro poll suggest that Latin Americans are no more content with the status quo than are Brexit-voting Britons or Trump-drunk Americans. The proportion of Latin Americans who think the elites govern in their own interests is on average 73%, its highest level in 12 years. For the first time, the share of people who say their countries are going backwards is bigger than that of people who think they are progressing.

Latin Americans do not fret about the same things as Europeans and Americans. Terrorism and immigration are not among their chief concerns. They are not in a protectionist mood: 77% favour greater integration between their countries and their neighbours. Inequality, the rise of which explains much discontent in Europe and the United States, has fallen in Latin America since the early 2000s. Latin anxieties are a cocktail of worries about the economy, crime and corruption (see chart).

Economic optimism has been hurt by six successive years of deceleration after the end of the global commodities boom. Latin Americans’ satisfaction with the performance of their economies is at its lowest level since 2004. Unemployment is the main economic worry. But in Venezuela, which received an absurd commendation last year from the UN’s Food and Agriculture Organisation for reducing malnutrition, shortages outweigh joblessness: 68% of Venezuelans say the supply of food is the most pressing problem.

Preoccupation with crime, which jumped in the late 2000s, remains high. In half the countries, including Mexico, Peru and El Salvador, it is the loudest complaint of 30% of respondents or more. Corruption comes first or second on people’s list of worries in four countries: Bolivia, Brazil, Chile and Peru.

The measure is scandal-sensitive. In Brazil, where investigators revealed that governing parties took billions of dollars in bribes from Petrobras, the state-controlled oil company, graft is the top concern of 20% of the population. It comes just behind health, which became the biggest worry after the outbreak last year of the Zika virus, which causes birth defects. In every country two-fifths of people or more think corruption is increasing.

Where disgust with the shenanigans of political leaders is strongest, support for democracy has dropped. It plunged by 22 percentage points to just 32% in Brazil from 2015 to 2016; in scandal-racked Chile it dropped 11 points, to 54%. In El Salvador, Guatemala and Nicaragua it is the lowest it has been in ten years. 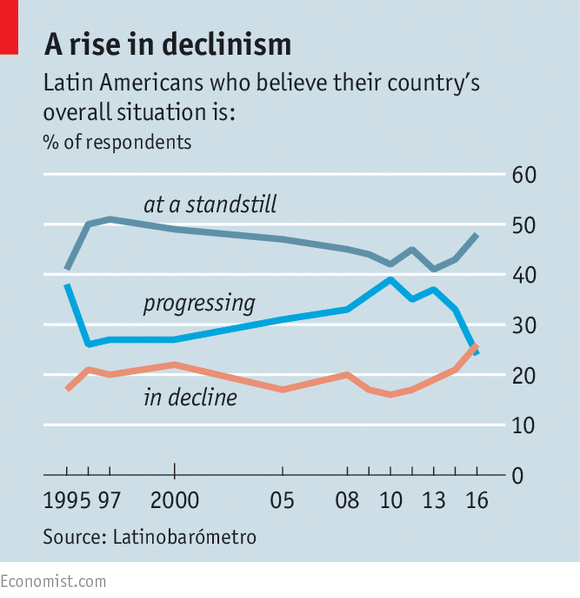 But that does not mean Latin Americans are ready to abandon democracy for something else. Overall, 54% say it is better than any other system, a proportion that has not changed much since 1995. Instead, they are channelling their discontent into activism. Outrage over corruption has inspired massive demonstrations in Brazil, Guatemala and Honduras. Thousands of Mexicans have protested against official impunity; now Chileans are demonstrating against inadequate pensions.

Evidence of greater assertiveness can be teased out from Latinobarómetro’s data. Last year’s survey asked whether Latin Americans would be willing to protest for such goals as higher wages, better health care and democratic rights. On a ten-point scale, where ten is the highest level of enthusiasm, they ranked their willingness to demonstrate at six-to-seven, a slight increase from 2013.

Changing attitudes towards violence are evidence of greater maturity and more assertiveness among ordinary citizens, argues Marta Lagos, Latinobarómetro’s director. Although Latin Americans say that violence from street crime is the most common sort, the most damaging to their country, they think, is domestic violence. The priority people give to domestic violence is new, Ms Lagos believes (although the question has not been directly posed before). It suggests that Latin Americans are beginning to challenge the culture of machismo, which is pervasive in some countries. Women in particular are less willing to suffer in silence. This represents a “huge cultural change”, says Ms Lagos. 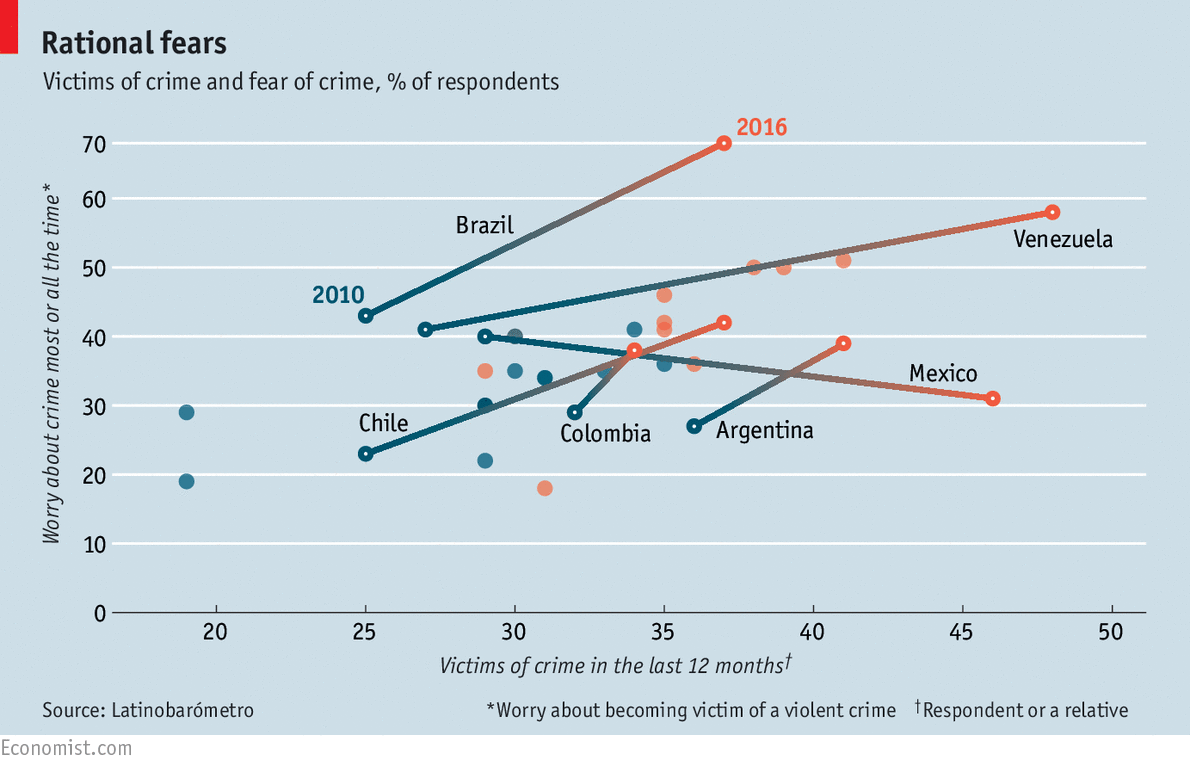 Latinobarómetro’s snapshot of opinion shows that the progress of recent decades has raised expectations, but that Latin Americans have little faith that today’s institutions can fulfil them. As Ms Lagos puts it, they are challenging established forms of leadership but have yet to invent new ones. Although Latin Americans have little appetite for the dictators of the past, new types of anti-democratic politics could emerge. Unless elected politicians offer answers to crime, low growth, inequality and corruption, less democratically minded leaders may provide them instead.