MOSCOW — Tiger shooter, bare-chested horseman and architect of Russia’s revival as a muscular global power, President Vladimir V. Putin, dressed in a somber suit and tie, sat for over an hour this past week sipping tea from a delicate porcelain cup and offering earnest advice on how to improve housing, medical care and other services in a provincial town south of here.

State television broadcast the entire encounter, in between reports of Russian airstrikes in Syria ordered by Mr. Putin and gleeful accounts of how, thanks to a stunt by a pro-Putin athlete, the Russian flag appeared during the opening ceremony of the Paralympic Games in Rio de Janeiro despite a ban on the Russian squad because of a doping scandal.

It was, in the span of just a few hours, a dizzying display of the political mastery that Mr. Putin has over his country and his own image — a tough, can-do warrior; caring father of his people; and guarantor that no slight to Russia’s pride will go unanswered.

Mr. Putin, 63, has shown an extraordinary ability to project an image of towering strength no matter what the circumstances. When he first took power, an old schoolteacher of his in St. Petersburg, Vera Malishkina, remembered her former pupil, who is below average height, as a superb basketball player because he was “very tall.”

He has many critics, many of them now in exile outside Russia or voiceless outside the coffee shops and wine bars of cosmopolitan cities like Moscow. But as Donald J. Trump said with admiration: Mr. Putin has “very strong control” over Russia.

According to Mr. Trump, the Republican Party’s presidential nominee, “He has been a leader far more than our leader.”

The beauty of that is largely in the eye of the beholder, and is certainly lost on Mr. Putin’s Russian opponents.

“Vladimir Putin is a strong leader in the same way that arsenic is a strong drink,” Garry Kasparov, the former world chess champion and a fierce critic of the Russian president, said in a Facebook post. “Praising a brutal K.G.B. dictator, especially as preferable to a democratically elected U.S. president, whether you like Obama or hate him, is despicable and dangerous.”

But what, aside from his undeniable skill at rallying the support of the Russian public, has made Mr. Putin such a potent figure, giving him a growing band of admirers like Mr. Trump and any number of right-wing populist leaders scattered across Europe?

Mr. Putin has annexed Crimea, stirred up and armed a pro-Russian rebellion in eastern Ukraine, turned a once vibrant Russian news media into an echo chamber, and restored Moscow as an indispensable player on the world stage, by turns a peacemaker and troublemaker. His peacemaking was at the fore early on Saturday when Russia and the United States agreed in Geneva to a new plan to curb violence in the Syrian conflict, in which Washington and Moscow back opposite sides but share a desire to destroy the Islamic State.

Judged by many of the yardsticks of success he set before his first presidential race in March 2000, however, Mr. Putin has often faltered.

Out With Oligarchs, in With Cronies

He has cut down to size or driven into exile some of the so-called oligarchs who made billions in murky deals under President Boris N. Yeltsin in the 1990s. But far from eliminating “oligarchs as a class” as he promised, he has created a new class of business moguls who still enjoy sweet insider deals and whose only real difference with those who thrived under Mr. Yeltsin is that they do not dare challenge the Kremlin.

An Economy Running on Fumes

Mr. Putin’s economic record has also been mixed to poor. The economy grew rapidly during his first two terms as president, from 2000 to 2008 — about 8 percent annually, on average, thanks largely to soaring prices for energy, of which Russia is a major exporter. But it developed none of the diversity beyond oil and gas or freedom from corruption that Mr. Putin repeatedly promised.

And with oil prices now below $50 a barrel, half what they were in 2014 and far off their peak of $145 in 2008, the economy is in the doldrums. It perked up slightly in June but has declined over all by nearly 1 percent since the start of the year. That is better than the decline of 3.7 percent last year but still a threat to what had been Mr. Putin’s contract with his people: rising prosperity in return for obedience.

With the economy on the ropes, the Kremlin has turned increasingly to foreign affairs to keep Mr. Putin’s popularity at levels that would delight any Western leader. His ratings soared after the annexation of Crimea in 2014, which unleashed a wave of patriotic fervor across Russia — and caused more economic pain as the United States and the European Union imposed sanctions.

The military interventions in Syria to prop up President Bashar al-Assad have been accompanied by a drumbeat of reports on state television celebrating Russia’s role as a key power without which no military or political knot can be untied. This has reinforced his status at home, but also a deep wariness of his intentions among mainstream political leaders abroad.

He has inserted Russia not only into Syria but also into the even more intractable Israeli-Palestinian conflict, with Russian diplomats working frantically to organize a meeting in Moscow between Prime Minister Benjamin Netanyahu and the leader of the Palestinian Authority, Mahmoud Abbas.

“It is important for Putin to drive home the message, especially to the U.S., that Russia is a global power,” said Dmitri Trenin, the director of the Moscow Carnegie Center, a research group, and an expert on Russian foreign policy.

Mr. Putin, he said, was “incensed” in 2014 when President Obama dismissed Russia as a “regional power.” Eager to show that Mr. Obama underestimated Russia’s reach, Mr. Putin has since embarked on a whirlwind of diplomatic activity across the Middle East and in Asia, asserting Moscow’s role far beyond the narrow confines of the former Soviet Union. 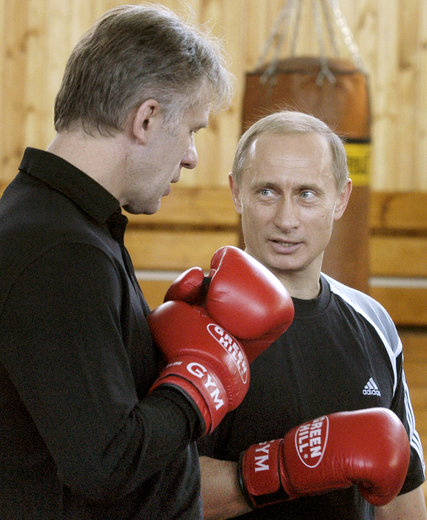 Mr. Putin in 2004 with Vyacheslav Fetisov, then the head of the Russian federal sports agency.CreditTass, via Associated Press

“You can criticize Russia for anything, but if you belittle Russia, that is a crime,” Mr. Trenin said.

That Russia is now a power to be reckoned with is a message drummed home relentlessly on television. Under President Yeltsin, television had a wide array of state and private channels offering a cacophony of views, but now it is largely state-controlled and entirely on message with the Kremlin.

“We interpret freedom of expression in different ways,” Mr. Putin told three Russian journalists who were writing a book to burnish his image before the 2000 presidential election, when he was a little-known former K.G.B. officer.

One of those journalists, Nataliya Gevorkyan, has since been beaten up twice by unidentified assailants in Moscow, and her old and once freewheeling newspaper, Kommersant, was taken over by a pro-Kremlin businessman. Effectively barred from publishing in Russia, she lives mostly in France.

But He Has a Seductive Popularity

While never a fan of Mr. Putin — “I was sure a guy who served in the K.G.B. should never be president” — Ms. Gevorkyan granted the Russian president one indisputable asset, one that appalls Moscow intellectuals but enthralls admirers like Mr. Trump: “People elected him.”

“He is popular. Maybe not 86 percent, but definitely more than 50 percent,” she continued. “That is democracy. I really don’t know about democracy anymore.”

Mr. Putin’s ratings are certainly far higher than those of Mr. Obama, and Mr. Putin should easily win the next presidential election in 2018 if he runs. But the authorities are taking no chances. In the latest strike in a sustained campaign to shut down or at least tame alternative sources of information, Russia’s Justice Ministry recently announced that it would place the Levada Center, an independent and highly respected national pollster, on its official register of organizations “operating as foreign agents,” a listing that the center said would cripple its work.

The decision to brand the country’s most reliable polling organization as an alien force followed the release of an opinion survey that showed declining support for Mr. Putin’s United Russia Party ahead of elections for Parliament on Sept. 18.

Mr. Putin’s popularity, said Peter Kreko of the Political Capital Institute, a research group in Budapest, has made him a seductive figure for Western politicians and electors, who often pine for decisive action and a more secure world, free from the uncertainties created by immigration, insecurity and economic globalization.

“All Western politicians that define themselves as out of the mainstream tend to have positive views of Russia and Putin,” he said. “They regard the Putin regime as hyper-efficient, contrary to the hesitant democratic and sometimes incompetent and paralyzed systems in their own countries.”

This efficiency, Mr. Kreko added, is mostly a myth but is widely believed. “We used to think that because of pluralist media, checks and balances, and globalization that people could not be brainwashed,” he said, “but what we see in Russia and also Hungary is that people can be brainwashed.”