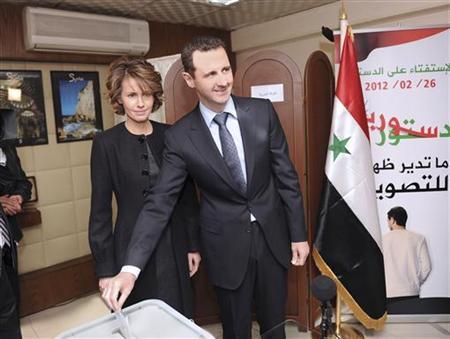 Syria’s President Bashar al-Assad and his wife Asma vote during a referendum on a new constitution at a polling station in a Syrian TV station building in Damascus February 26, 2012, in this handout photograph released by Syria’s national news agency SANA. REUTERS/SANA

She was supposed to be the gentler face of a would-be reformist regime. Now Asma al-Assad has become a hate figure for many.

Syria’s London-born first lady, once breathlessly described as a “rose in the desert”, is ensconced at the heart of the shadowy inner circle of President Bashar al-Assad.

As Syria slides towards civil war and foreign powers watch for cracks within the ruling clan, understanding Asma could prove vital to understanding the Assads and the future of the Syrian crisis.

A British-educated former investment banker, Asma cultivated the image of a glamorous yet serious-minded woman with strong Western-inspired values who was meant to humanize the increasingly secretive and isolated Assad family.

That image crumbled when her husband responded to an anti-government rebellion with extreme violence a year ago. Asma had clearly decided to stand by her man despite international revulsion at his actions. Assad himself says he is fighting an insurrection, involving foreign-backed “terrorists”.

Asma’s ancestral home is the city of Homs, now a symbol of the revolt which has been subjected to particularly fierce attack by her husband’s tanks to become ground zero in the year-long conflict.

With her penchant for crystal-encrusted Christian Louboutin shoes and Chanel dresses, Asma is a puzzle for many. The opposition roundly rejects suggestions that she is effectively a prisoner of conscience in the presidential palace.

“She was very much, as we would say, left wing. She (created) a very, very good impression. She seemed to be very bright, very respectful of others,” said Gaia Servadio, a writer and historian who has worked with Asma on several art projects.

“It’s a very nasty regime … Thousands of people have been killed. So it’s very difficult to say: poor woman. She certainly should have found a way to talk.”

The world was smitten by her immaculate facade. In the Western media, Asma, a 36-year-old mother of three, was described as sophisticated, elegant, confident, with a “killer IQ” and an interest in opening up Syria though art and charity.

For those who pinned their hopes on Assad as a potential reformer, his photogenic wife bolstered that image, lending a touch of glamour to his awkward public appearances.

A glowing article in Vogue magazine described her as “a rose in the desert” and her household as “wildly democratic”. A French newspaper said she was an “element of light in a country full of shadow zones”.

People were charmed by her classy demeanor, liberal views and British accent. She received the Gold Medal of the Presidency of The Italian Republic for humanitarian work in 2008 and won an honorary archaeology doctorate from La Sapienza university in Rome.

Yet emails published by Britain’s Guardian newspaper this month from accounts believed to belong to the family offer a different portrait, showing her as a capricious dictator’s wife spending tens of thousands of pounds on jewels, fancy furniture, and a Venetian glass vase from Harrods.

“I am the real dictator, he has no choice,” she apparently said in one of the emails in a comment about her husband.

Her London contact, a Syrian businessman, appears to send emails to her using an address he has nicknamed “Party party”.

The story of how the London-born daughter of a Sunni Muslim Syrian doctor married into Assad’s family, members of the powerful minority Alawite sect, reads like a cautionary tale.

She was born in the west London suburbs, whose sleepy streets are lined with neat houses, just like her family’s. Twelve years after she married Assad, the family home appears almost abandoned, its curtains drawn. Neighbors said her father still lives there with his wife, a former diplomat.

“We know they are there but we don’t see them,” said one neighbor, a veiled Arab woman who asked not to be named. No one answered the door bell when Reuters called at the weekend.

A Syrian dissident from Aleppo, who lives nearby and asked to be identified only by his nickname, Zayed, said most Syrians in Britain despised Asma now.

Zayed, angrily comparing Asma to Marie Antoinette or the wife of Romanian dictator Nicolae Ceausescu, called on the Syrian leader’s wife to “make a stand for your own sake, for your own people … She never did.”

A senior member of the British Syrian Society, set up with Assad’s help to promote business ties, said he has met the first couple in London and used warm words to describe them.

“They were quite impressive to talk to. He came across as someone who wanted to listen, get ideas, get advice, open to everybody, he made it plain that he wanted Syrians abroad to help building the country again. He was welcoming and warm.”

Speaking on condition of anonymity in a gentlemen’s club in a smart London neighborhood, he added: “We all felt there was an opportunity that he, the president, representing the younger generation, could lead Syria to a new age of change.

“Perhaps he feels betrayed. Why are they (the West) ganging up on him? Now some people say, he is in full control, others say that he is not. Maybe he is shocked by the fact that … in the end they all turned against them.”

Asma’s father, Fawaz Akhras, a cardiologist and founder of the British Syrian Society, has not responded to a Reuters request for a meeting, made through an intermediary.

“WARLORDS, ONE AGAINST THE OTHER”

Known as Emma to her British friends, Asma spent the first 25 years of her life in North Acton, went to a smart London girls school, Queen’s College, and read computer science at King’s College London.

She was a rising star at JP Morgan when she met Bashar, who had studied ophthalmology in London but was sent home to be groomed for the presidency after his elder brother, Basil, died in a car crash in 1994.

“I was always very serious at work, and suddenly I started to take weekends (off), or disappear, and people just couldn’t figure it out,” she told Vogue. “What do you say – ‘I am dating the son of a president?'”

They married in 2000. What followed was a life full of glamour. They once dined with Angelina Jolie and Brad Pitt in Syria. Bashar joked, according to Vogue: “Brad Pitt wanted to send his security guards here to come and get some training!”

One photograph from happier days depicts them playing with their children, toys scattered around on the carpet.

The Assad side of the clan, however, didn’t like Asma, not least because of her Sunni Muslim origins.

“Certainly the Assad family doesn’t like her, to put it mildly … She was constantly under watch, her telephone, she was very careful,” Servadio, who spent time with the family in Syria before the uprising, told Reuters in London.

“She was shouted at. How odd, frankly, (that) somebody who is meant to be the wife of the president who is an autocrat, can be shouted at in this way.” She added: “It was like a mediaeval power, warlords, one against the other.” 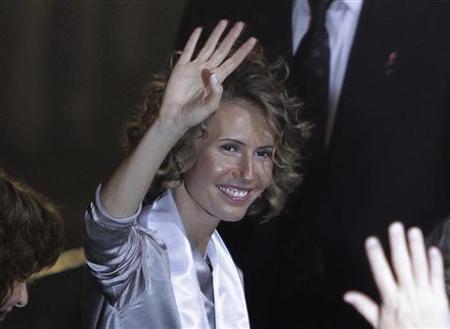 Asma’s husband was elected president with 97 percent of the vote in 2000 after the death of his father, Hafez al-Assad, who had ruled Syria with an iron fist for decades.

Before the start of the 2011 uprising, there was hope Syria could change. Syrians saw his choice of wife as proof that things were about to change.

“When he came to power, people said, ‘Okay … let’s give him a chance and see what he’s going to do,'” said Ghassan Ibrahim, Global Arab Network’s London-based editor. “What happened is that he made corruption even more organized, Mafia appeared, poverty grew sharply … (But) she is standing by the criminal and she supports him.”

Emails leaked by Syria’s opposition offer a chilling glimpse into the lavish lifestyle the couple enjoyed even as Assad’s troops shelled opposition strongholds.

The tone of those emails is incongruously jokey. In one, Asma’s husband disparages his own reforms as “rubbish”. He also shares a pun playing on the words “elections” and “erections”.

Asma appears to have written in an email: “If we are strong together, we will overcome this together … I love you.”

As the revolt unfolded she gradually disappeared from public view but broke her silence in February, saying in a statement: “The president is the president of Syria, not a faction of Syrians, and the first lady supports him in that role.”

In a haunting interview with CNN, looking nervous, she once said: “We are losing time. We are working against the clock. Three thousand and three hundred people injured. More than that, 22,000 people have been displaced from their homes … This is the 21st century. Where in the world could this happen?”

She was talking in 2009 about an Israeli operation in Gaza. 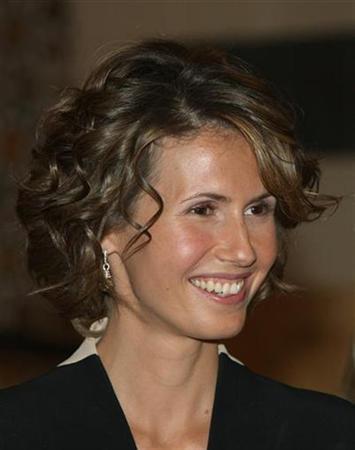 Syria’s first lady Asma al-Assad smiles after receiving the prize of the Arab First Lady of 2008, from the centre of Board of Paris-Based Arab Woman Studies, in Damascus August, 27.2008. . REUTERS/Khaled al-Hariri

Some believe she is a propaganda tool of the Assad family, a liberal going through a moral crisis in Damascus, unable to speak up or escape.

“She is virtually a prisoner. The two of them missed their boat,” said Servadio. “I would certainly accuse him (Assad) of being a coward. … I think he is a puppet, very much used.

“For them (the family) it’s wonderful to have a scapegoat, these two people at the top who are absorbing all the hatred.”

Ibrahim disagreed. “It’s not true at all. Assad has been in power for over 12 years. He is in full control. Giving such excuses to him is unacceptable. They are like the Mafia.”

As battles raged across Syria, Asma kept spending on designer baubles from London, according to the emails.

For ordinary Syrians, Asma al-Assad is now a hate figure.

“They have stolen Syrian money. She is squandering it here in London,” said Fawaz, a man who came to an opposition fund-raising event in London wrapped in a Syrian flag.

“She and her father are accomplices to this crime. They learned nothing from the democracy here in the UK.”

A Case Against America