I HAVE been here less than a month, but already I’ve discovered something that surely must be bad for business if your business is running The New York Times. It comes via the inbox to the public editor, from people like Gary Taustine of Manhattan, who writes: “The NY Times is alienating its independent and open-minded readers, and in doing so, limiting the reach of their message and its possible influence.”

One reader from California who asked not to be named believes Times reporters and editors are trying to sway public opinion toward their own beliefs. “I never thought I’d see the day when I, as a liberal, would start getting so frustrated with the one-sided reporting that I would start hopping over to the Fox News webpage to read an article and get the rest of the story that the NYT refused to publish,” she says.

Here’s frustration as it crests, from James, an Arizona reader: “You’ve lost a subscriber because of your relentless bias against Trump — and I’m not even a Republican.”

You can imagine what the letters from actual conservatives sound like.

Emails like these stream into this office every day. A perception that The Times is biased prompts some of the most frequent complaints from readers. Only they arrive so frequently, and have for so long, that the objections no longer land with much heft.

Like the tiresome bore at a party, I went around asking several journalists in the newsroom about these claims that The Times sways to the left. Mostly I was met with a roll of the eyes. All sides hate us, they said. We’re tough on everyone. That’s nothing new here.

That response may be tempting, but unless the strategy is to become The New Republic gone daily, this perception by many readers strikes me as poison. A paper whose journalism appeals to only half the country has a dangerously severed public mission. And a news organization trying to survive off revenue from readers shouldn’t erase American conservatives from its list of prospects.

No one here would tell me the ideological breakdown of The Times’s total audience or subscriber base, numbers that are considered proprietary. I know only that there is unease in at least a few offices about whether The Times feels sufficiently relevant to a broad slice of readers.

Why is it that conservatives, and even many moderates, see in The Times a blue-state worldview? Let’s set aside for now the core of their criticism — that the coverage is in fact biased. I’ll be turning to that as I settle into the job. My focus here is only on the perceptions. Because while one might debate the substance of the claims, the building blocks that created them are in plain sight.

The home page is a good place to start. Anchoring its top right corner is the Opinion section, which promotes the columns and editorials of its mostly liberal writers. “Readers know the difference between opinion and news,” you’ll often hear. I’m not so sure all do, especially when the website makes neighbors of the two and social platforms make them nearly impossible to tease apart.

Maybe we’re well past worrying about that. So turn to the drumbeat of Hillary Clinton campaign ads on the website. Even for me, who fully knows an ad from a news story, seeing Clinton’s smiling face when I’ve come to read the news can be rather jarring. 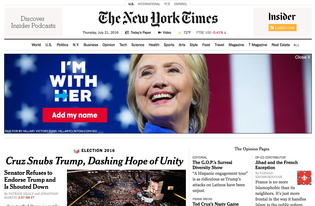 Readers often run across ads like these on The New York Times’s homepage.

How about all the reader comments attached to political articles? On most days, conservatives occupy just a few back-row seats in this giant liberal echo chamber, not because Republicans are screened out by editors but because they don’t show up in the first place. Bassey Etim, who oversees the comments forum, makes a point of salting conservative voices into the week’s list of top commenters. “It just makes the conversation more dynamic and interesting,” he says.

For some print readers, the placement of an editorial calling for gun control on the front page last December, which garnered a record number of comments, was shrill proof of the kind of Times bias they expect. There was a torrent of debate over the appropriateness of its placement.

I asked Dean Baquet, the executive editor, about the perception of liberal bias that hangs over his newsroom, whether from the gun editorial, the Clinton ads, or the actual work of his journalists. He doesn’t believe that the coverage on most days has a liberal cast, nor does he think campaign ads or the rare front-page editorial create that perception.

But he does want The Times’s reach to be wide. “We have to be really careful that people feel like they can see themselves in The New York Times,” he said. “I want us to be perceived as fair and honest to the world, not just a segment of it. It’s a really difficult goal. Do we pull it off all the time? No.”

I agree with Baquet: It isn’t easy. But it’s not hard to imagine some small steps on a longer journey — leaving editorials on the editorial page, banning campaign ads from the home page, or building a better mix of values into the ranks of the newsroom’s urban progressives.

That last one might even help reporting between the country’s coastlines, where the trust level can be gaping. Mark Leibovich, a veteran political writer on the magazine staff whose job entails talking to voters across the spectrum, believes The Times’s coverage is generally balanced. But the perception that it isn’t complicates his job. “It’s becoming a much more menacing factor,” he said. “You get hit with complaints that we’re biased pretty much whenever you go out, especially at a Republican rally.”

WHAT’S happening at The Times isn’t only about The Times. It’s part of a fracturing media environment that reflects a fractured country. That in turn leads liberals and conservatives toward separate news sources. A Pew Research Center survey two years ago found that liberals are flocking to The Times, with 65 percent of its readers possessing political values that were left of center.

Does that mean The Times should write off conservatives and make a hard play for the left and perhaps center left? I hope that question is not on the table. It would change everything about what the paper is and the force of its journalism.

Imagine what would be missed by journalists who felt no pressing need to see the world through others’ eyes. Imagine the stories they might miss, like the groundswell of isolation that propelled a candidate like Donald Trump to his party’s nomination. Imagine a country where the greatest, most powerful newsroom in the free world was viewed not as a voice that speaks to all but as one that has taken sides.

Or has that already happened? 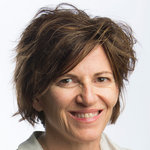 The Mind of Mr. Putin