Lula and the BRICS in a fight to the death 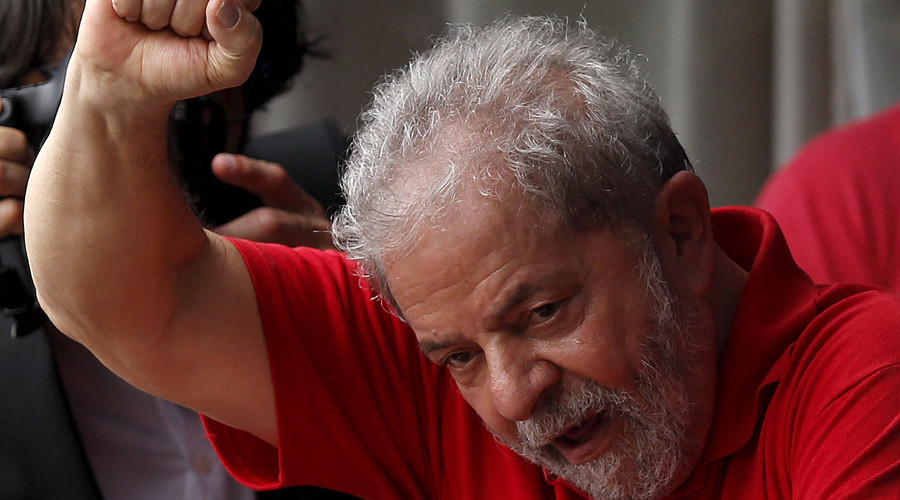 “BRICS” is the dirtiest of acronyms in the Beltway/Wall Street axis, and for a solid reason: the consolidation of the BRICS is the only organic, global-reach project with the potential to derail Exceptionalistan’s grip over the so-called “international community.”

So it’s no surprise the three key BRICS powers have been under simultaneous attack, on many fronts, for some time now. On Russia, it’s all about Ukraine and Syria, the oil price war, the odd hostile raid over the ruble and the one-size-fits-all “Russian aggression” demonization. On China, it’s all about “Chinese aggression” in the South China Sea and the (failed) raid over the Shanghai/Shenzhen stock exchanges.

Brazil is the weakest link among these three key emerging powers. Already by the end of 2014 it was  clear the usual suspects would go no holds barred to destabilize the seventh largest global economy, aiming at good old regime change via a nasty cocktail of political gridlock (“ungovernability”) dragging the economy to the mud.

Myriad reasons for the attack include the consolidation of the BRICS development bank; the BRICS’s concerted push for trading in their own currencies, bypassing the US dollar and aiming for a new global reserve currency to replace it; the construction of a major underwater fiber-optic telecom cable between Brazil and Europe, as well as the BRICS cable uniting South America to East Asia – both bypassing US control.

And most of all, as usual, the holy of the holies – connected with Exceptionalistan’s burning desire to privatize Brazil’s immense natural wealth. Once again, it’s the oil.

Get Lula or else

WikiLeaks had already exposed how way back in 2009 Big Oil was active in Brazil, trying to modify – by all extortion means necessary – a law proposed by former president Luiz Inácio Lula da Silva, known as Lula, establishing profitable state-run Petrobras as the chief operator of all offshore blocks in the largest oil discovery of the young 21st century; the pre-salt deposits.

Lula not only kept Big Oil – especially ExxonMobil and Chevron – out of the picture but he also opened Brazilian oil exploration to China’s Sinopec, as part of the Brazil-China (BRICS within BRICS) strategic partnership.

Hell hath no fury like Exceptionalistan scorned. Like the Mob, it never forgives; Lula one day would have to pay, like Putin must pay for getting rid of US-friendly oligarchs.

The ball started rolling with Edward Snowden revealing how the NSA was spying on Brazilian President Dilma Rousseff and top Petrobras officials. It continued with the fact that the Brazilian Federal Police cooperate, receive training and/or are fed, closely, by both the FBI and CIA (mostly in the anti-terrorism sphere). And it went on via the two-year-old “Car Wash” investigation, which uncovered a vast corruption network involving players inside Petrobras, top Brazilian construction companies and politicians from the ruling Workers’ Party.

The corruption network is real – with “proof,” usually oral, rarely backed up by documents, obtained mostly from artful dodgers-cum-serial liars who rat on someone as part of a plea bargain.

But for the “Car Wash” prosecutors, the real deal was, from the beginning, how to ensnare Lula.

That brings us to the Hollywood spectacular enacted last Friday in Sao Paulo that sent shockwaves around the world. Lula “detained,” interrogated, humiliated in public. This is how I analyzed it in detail.

Plan A for the Hollywood-style blitz on Lula was an ambitious double down; not only to pave the way for the impeachment of President Dilma Rousseff under a “guilty by association” stretch, but to “neutralize” Lula for good, preventing him from running for office again in 2018. There was no Plan B.

Predictably – as in many an FBI sting – the whole op backfired. Lula, in a political master class of a speech beamed live across the country, not only convincingly clad himself as the martyr of a conspiracy, but also re-energized his troops; even respectable conservatives vocally condemned the Hollywood show, from a minister in the Supreme Court to a former justice minister, as well as top economist Bresser Pereira, one of the founders of the PSDB – the former social democrats turned Exceptionalistan-allied neoliberal enforcers and leaders of the right-wing opposition.

Bresser actually stated the Brazilian Supreme Court should intervene on Car Wash to prevent abuses. Lula, for instance, had asked for the Supreme Court to detail which jurisprudence was relevant to investigate the accusations against him. Moreover, a lawyer on center stage during the Hollywood blitz said Lula answered all questions during the almost four-hour interrogation without blinking – questions he had already answered before.

Lawyer Celso Bandeira de Mello, for his part, went straight to the point: the Brazilian upper middle classes – which include a largely appalling lot wallowing in arrogance, ignorance and prejudice, whose dream is a condo in Miami – are fearful and terrified to death that Lula may run, and win again, in 2018.

And that brings us to the judge and executioner of the whole drama: Sergio Moro, Car Wash’s leading actor.

Moro’s academic career is hardly exciting. He’s not exactly a theorist heavyweight. He graduated as a lawyer in 1995 in a mediocre university in the middle of nowhere in one of Brazil’s southern states and made a few trips to the US, one of them financed by the State Department to learn about money laundering.

As I noted before, his chef-d’oeuvre is an article published way back in 2004 in an obscure magazine (in Portuguese only, titled Considerations about Mani Pulite, CEJ magazine, issue number 26, July/September 2004), where he clearly extols “authoritarian subversion of juridical order to reach specific targets” and using the media to intoxicate the political atmosphere.

In a nutshell, judge Moro literally transposed the notorious 1990s Mani Pulite (“Clean Hands”) investigation from Italy to Brazil – instrumentalizing to the hilt mainstream media and the judiciary to achieve a sort of “total delegitimization” of the political system. But not the whole political system; just the Workers’ Party, as if the comprador elites permeating Brazil’s rightwing spectrum were cherubic angels.

So it comes as no surprise that Moro’s prime sidekick as Car Wash unrolled is the Marinho family’s oligopoly, the Globo media empire – a nest of reactionary, and not very clever, vipers who entertained very cozy relations with the Brazilian military dictatorship from the 1960s to the 1980s. Not by accident, Globo was informed about Lula’s Hollywood-style “arrest” way before the fact, allowing it to invest in CNN-style blanket coverage.

Moro is viewed by legions in Brazil as an indigenous Elliot Ness. Other lawyers who have closely followed his work though hint he harbors the warped fantasy of a Workers’ Party as a mob leeching and plundering the state apparatus with the aim of delivering it, in pieces, to trade unions.

According to one of these lawyers who talked to Brazilian independent media, a former president of the Lawyers’ Association in Rio, Moro is surrounded by a bunch of young fanatical prosecutors, with little juridical knowledge, and posing as the Brazilian Antonio di Pietro (but without the solidity of the “Clean Hands” Milanese prosecutor). Worse, Moro is oblivious that the implosion of the Italian political system led to the rise of Berlusconi. In Brazil, it would certainly lead to the rise of a clown/village idiot supported by the Globo empire, whose oligopolistic practices are quite Berlusconian.

A case can be made that the Hollywood blitz on Lula holds a direct parallel to the first attempt at a coup d’etat in Chile in 1973, which tested the waters in terms of popular response before the real deal. In the Brazilian remix, assorted Globo media maggots pose as digital Pinochets. At least many a street in Sao Paulo now bears graffiti to the effect of “Military coup – Never again.”

Yes, because this is all about a white coup – in the form of a Rousseff impeachment and sending Lula to the gallows. But old (military) habits die hard; Globo media maggots are now extolling the Army to take to the streets to “neutralize” popular militias. And this is just the beginning. Right-wingers are getting ready for a national mobilization on Sunday calling for – what else – Rousseff’s impeachment.

Car Wash’s merit is to investigate corruption, collusion and traffic of influence in abysmally corrupt Brazil. But everyone, every political faction, should be investigated – including those representing Brazilian comprador elites. That’s not the case. Because the political project allied with Car Wash couldn’t care less about “justice”; the only thing that matters is to perpetuate a vicious political crisis as a means to drag the seventh largest economy in the world into the mud and reach the Holy Grail: a white coup, or good ol’ regime change. But 2016 is not 1973, and the whole world by now knows who’s a sucker for regime change.

The statements, views and opinions expressed in this column are solely those of the author and do not necessarily represent those of RT.